The Arkansas Razorbacks and Texas A&M Aggies face off on Saturday in a college football showdown at Kyle Field.

Not many thought the Arkansas Razorbacks would be 2-2 at this point of the season after a few terrible seasons in a row. Arkansas has won two of their last three games and they have covered the spread in all four of their games. In the last game against Ole Miss the defense stepped up in a big way giving up only 21 points which is impressive considering the type of offense they were playing. On offense Arkansas is averaging 23 points per game and a big chance has been their play at quarterback. Feleipe Franks comes into this game averaging 974 yards, eight touchdowns, and three interceptions. If Arkansas wants to win the defense is going to need to find success.

On the other side of this matchup is Texas A&M Aggies who come into this game with a 3-1 record and each of the last two games they have covered the spread. The defense at times has struggled for Texas A&M but in the last game against Mississippi State they only gave up 14 points while scoring 28 points. Kellen Mond has been under center for Texas A&M and coming into this game he has thrown 984 yards, nine touchdowns, and two interceptions. The one thing Texas A&M can’t do in this game is overlooked for Arkansas because that has seemed to be the problem for other teams.

Arkansas has done a good job of making games ugly and that is going to happen again in this game. Look for Arkansas’s defense to step up enough to help keep this game low scoring and for the under to cash. 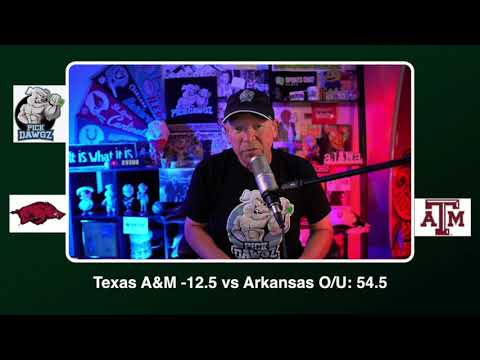