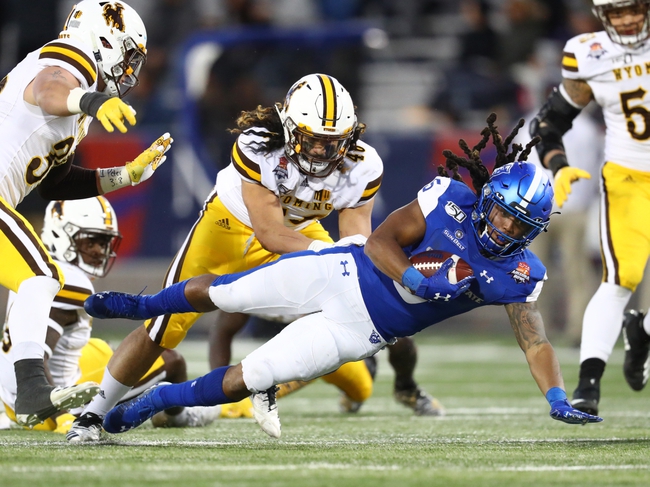 The Wyoming Cowboys come into the 2020 season later than expected, but better late than never after a 3rd eight-win season and 2nd bowl victory in three years under head coach Craig Bohl, with the Cowboys finishing with a record of 8-5, including a 38-17 win over Georgia State in the Arizona Bowl. Sean Chambers is back under center for Wyoming after throwing for 915 yards, 7 touchdowns and 3 picks as well as rushing for almost 600 yards and 10 touchdowns as well before having his season cut short due to a knee injury. Levi Williams is back as well to battle Chambers for the starting job as a redshirt freshman. All-conference running back Xazavian Valladay is back after logging almost 1,300 yards and six scores in 2019, but that’s where the production ends for Wyoming as this year’s starting crop of receivers has no receiver with more than eight catches last year, but whoever starts under center will have a solid pair of 6’7” tight ends in Jackson Marcotte and Nate Weinman. Defensively, Garrett Crall and Solomon Byrd are back after combining for 15.5 tackles for a loss and 11 sacks last year as well as defensive tackle Ravontae Holt who could be a massive return for the Cowboys. Chad Muma and potentially Keyon Blankenbaker may be called upon to step up in the linebacker group but Azizi Hearn, C.J. Coldon and Jordan Murry are all back to anchor the secondary.

The Nevada Wolf Pack come into this season looking to take another step in the right direction under Jay Norvell, posting back-to-back winning season after a 7-6 record last year, including a 30-21 loss to Ohio in the Famous Idaho Potato Bowl. Carson Strong is back under center for Nevada after throwing for 2,335 yards, 11 touchdowns and 7 interceptions last year. Elijah Cooks is back in the receiving corps after posting 78 grabs for 926 yards and 8 scores last season and with Romeo Dobbs back and healthy after a season-ending injury the aerial attack could be one to watch from Nevada this season. Toa Taua and Devonte Lee make up a nasty one-two punch for the Wolf Pack in the backfield, but it didn’t translate last season as the Wolf Pack averaged just 3.4 yards per carry last year. The good news is that the five starters from the line are all back, so there’s room for growth and chemistry in the trenches to improve from last year. Defensively, the Wolf Pack look poised for a solid season under new defensive coordinator Brian Ward, led by Dom Peterson who is coming off of an all-conference first-team selection as well as Chris Green and Sam Hammond up front. Lawson Hall had a solid junior year and will look to take it to the top in his senior year alongside Lamin Touray, James Fotofili and Giovanni Miranda. The secondary should be strong as well, led by EJ Muhammad and Tyson Williams.

I get that the Cowboys have had a solid run under Craig Bohl, but this line confuses me. Neither Wyoming QB whether it be Chambers or Williams was lighting the world on fire last season, and there’s a whole new receiving corps that needs to work out connections with the quarterbacks and a returning running back and a pass rush isn’t enough for me to just automatically lay points on the road in the opening game of the season. Nevada’s bringing back the majority of the starting unit from last year’s squad and I think that continuity combined with a fresh look from a new defensive coordinator pays dividends here. I’ll take the free points with Nevada at home in this one.