The Southern Mississippi Golden Eagles will travel to Williams Stadium (VA) to take on the Liberty Flames this Saturday afternoon in College Football action.

The Southern Mississippi Golden Eagles had their 2nd consecutive game cancelled last weekend due to COVID-19 and come into this game with a 1-3 (1-1 C-USA) overall record after defeating the North Texas Mean Green, 41-31, on October 3rd.  In their match-up agianst North Texas, the Golden Eagles were outstanding offensively against the Mean Green defense and was able to hold on late after a 4-yard TD run by Darius Maberry gave the Golden Eagles a 34-17 lead early in the 4th quarter. Southern Mississippi was outgained by North Texas by a 483-437 margin, however, did win the turnover margin by a 3-1 margin in the victory. Leading the way for the Golden Eagles was RB Frank Gore Jr. who had 130 yards and a TD on 23 carries.

The Liberty Flames improved to 5-0 on the season after defeating the Syracuse Orange, 38-21, this past Saturday. Liberty’s offense had no trouble finding the endzone agianst the Syracuse defense and easily cruised to victory after a 16-yard TD run by Peytton Pickett gave the Flames a 35-14 lead with 2:58 left in the 3rd quarter. Liberty outgained Syracuse by a 520-308 margin and held the Orange to just 19 first downs in the victory. Leading the way for the Flames was RB Shedro Lewis who had 170 rushing yards & 2 TD’s on just 10 carries.

Southern Mississippi has not played in the last two weeks due to COVID which cannot help a team that despite picking up a victory agianst North Texas, has not look that impressive this season. Liberty is a team that is starting to get some of the recognition that they deserve and as I think their running game should have no issues putting up points on the board against a Southern Mississippi defense that is allowing 225.0 yds/g on the ground, I’m taking the Flames to stay undefeated and cover this double-digit spread. Good Luck! 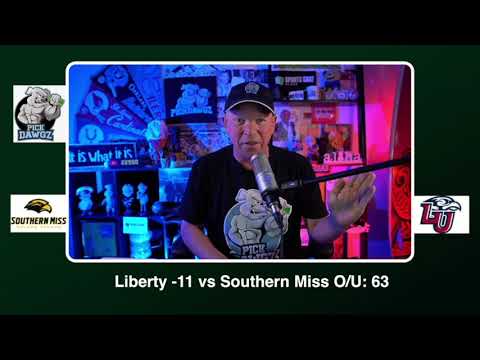