The Minnesota Golden Gophers and Michigan Wolverines face off on Saturday in their first college football game of the year at TCF Bank Stadium.

Minnesota had a big 2019 season wrapped up by beating Auburn in the Outback Bowl and there are some who believe this team could play in the Big Ten Championship game. Gone is Tyler Johnson and Antonie Winfield Jr who both went to the NFL, but this is still a team loaded with talent. Under center is Tanner Morgan who could really help his NFL stock with a big year. Outside is ride receiver Rashod Batement who is one of the best wide receivers in college football. In this game the offense needs to get out to a fast start and put pressure on Michigan’s offense. If Minnesota wants to live up to their goals for this season, this is a must win.

On the other side of this matchup is the Michigan Wolverines who have to feel a lot of pressure after not living up to the expectations since Jim Harbaugh took over as the coach. This is one against a Wolverines team who has a lot of players who will play at the next level but their success depends on one thing if Joe Milton can live up to the expectations under center. There is a lot of buzz about how Milton can be the next great Michigan quarterback, but he can’t be forcing things in this game or this is a game that will be a loss for the Wolverines.

Every year Michigan is overrated and that is going to be the case in this one. Look for Tanner Morgan and Batsmen to have a big game and the Wolverines won’t have an answer. Back Minnesota to win this game on the money line. 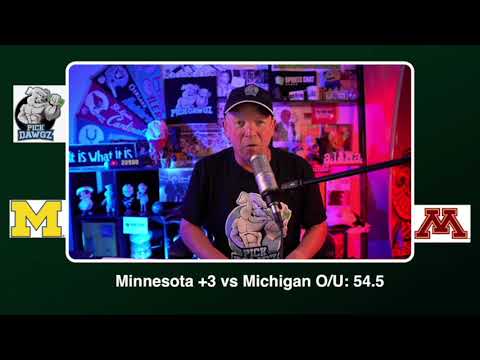