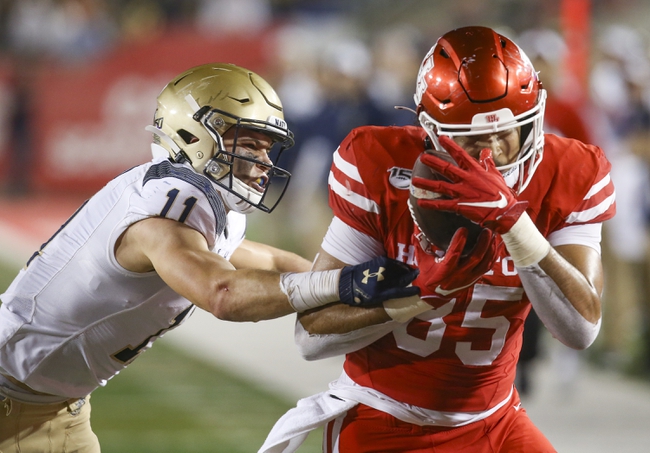 The Houston Cougars will travel to Navy-Marine Corps Memorial Stadium to take on the Navy Midshipmen this Saturday afternoon in College Football action.

The Houston Cougars dropped to 1-1 (1-0 AAC) on the season after being defeated by the 14th ranked BYU Cougars, 43-26, this past Friday. Houston looked in control of the game after scoring 24 unanswered points to take a 26-14 lead late in the 3rd quarter, however, the Cougars defense struggled down the stretch and allowed BYU to get the come from behind victory after scoring 29 unanswered points to close out the game. Houston was outgained by BYU by a 478-438 margin in the loss. Leading the way for the Cougars was QB Clayton Tune who completed 21 of 31 passes for 310 yards & 2 TD’s while also adding a rushing TD.

The Navy Midshipmen won their 2nd straight game and improved to 3-2 (3-0 AAC) on the season after defeating the East Carolina Pirates, 27-23, this past Saturday. Navy was able to generate plenty of offense behind their rushing attack and held off a late charge from the Pirates after taking a 27-13 lead at the end of the 3rd quarter. Navy was outgained by East Carolina by a 372-318 margin, however, did force the Pirates into committing two turnovers in the victory. Leading the way for the Midshipmen was RB Nelson Smith who had 157 rushing yards & 2 TD’s on 17 carries.

Houston let one slip away against BYU last week, however, this is still a very talented football team that should have plenty success agianst a Navy defense that is giving up over 34 ppg. Navy comes into this game with a winning record, however, I cannot say I have been overly impressed by the Midshipmen’s victories this season. Navy lost BYU by a 55-3 margin earlier in the season and as I think their rushing attack will have some trouble agianst the Houston defense, I think the Cougars do enough on the road and cover this double-digit spread. Good Luck!