The Hawaii Rainbow Warriors and Fresno State Bulldogs face off on Saturday in college football action at Bulldog Stadium.

Hawaii found success during the 2019 season finishing with a 10-5 record and they ended the season with a win over BYU, a team that has found a lot of success during the 2020 season. This Hawaii team is going to look a lot different this year and it starts with head coach Todd Graham who used to be in charge at Arizona State. Starting quarterback Cole McDonald is gone and the wide receiver corps is young, but that doesn’t mean there aren’t expectations surrounding this team. On defense they weren’t terrible but this is a really undersized crew and against a strong offensive like Boise, their defense is going to need to step up.

The Fresno State Bulldogs look different this year with Kalen DeBoer now in charge of the team. DeBoer was a strong assistant for years, and now he get a chance to continue to build the program.Someone new is going to be under center for this team, but either Danny Velasquez or Jake Haener is going to be under center . Running back Ronnie Rivers is back and he is really hard to bring down. On defense, the Bulldogs are a veteran group with ten of the starters back from last year’s team. The only area they really lost any talent was in the secondary, something that might not be good against an offense like Hawaii.

Hawaii’s offense is strong and Vegas has got the wrong team favored in this one. Look for Hawaii to run up the score, Fresno State isn’t going to have the offense to keep up in this one, and Hawaii will win this game outright. In terms of the total the play is with the over. 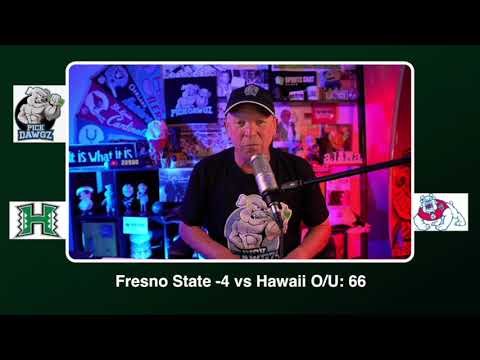