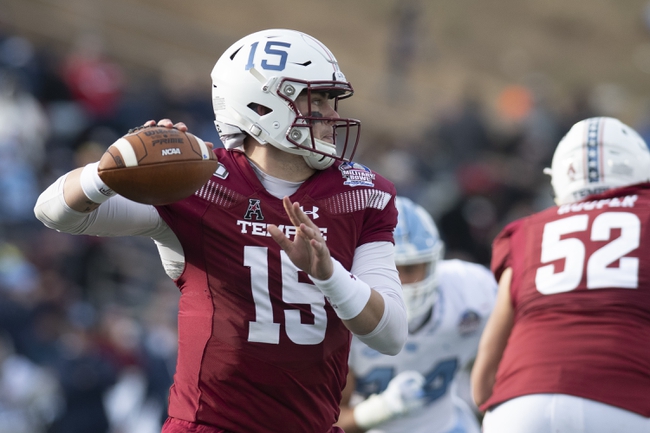 The South Florida Bulls will travel to Lincoln Financial Field to take on the Temple Owls this Saturday afternoon in College Football action.

The South Florida Bulls lost their 3rd straight game and dropped to 1-3 (0-2 AAC) on the season after being defeated by the East Carolina Pirates, 44-24, this past Saturday. South Florida had no answers defensively agianst the Pirates and could not fight back in the 2nd half after going into halftime trailing by a 31-17 margin. South Florida was outgained by East Carolina by a 432-398 margin and lost the turnover battle by a 2-0 margin in the loss. Leading the way for the Bulls was RB Johnny Ford who had 44 rushing yards & 2 TD’s on 8 carries.

The Temple Owls (0-1; 0-1 AAC) finally kicked of their 2020 season, however, could not do it on a winning note after falling to the Navy Midshipmen, 31-29, this past Saturday. Temple fought back to make it a game late after trailing 21-10 at halftime, however, their game-tying two-point conversation failed after a Re’Mahn Davis 1-yard TD run with just 1:02 left in the 4th quarter. Temple outgained Navy by a 407-299 margin, however, did lose the turnover battle by a 1-0 margin in the loss.

Leading the way for the Owls was QB Anthony Russo who completed 21 of 20 passes for 206 yards, 1 TD, and an INT. Russo also did some damage near the goal line with his legs as he also ran for 2 TD’s. The Owls backfield was led by Re’Mahn Davis who had 97 yards and a TD on 23 carries. RB Tayvon Ruley also pitched in on the Owls backfield was 46 rushing yards on just 5 carries. The leading receivers for Temple were Branden Mack (7 rec, 80 yards, TD), David Martin-Robinson (5 rec, 72 yards), Randle Jones (4 rec, 48 yards), and Jadan Blue (5 rec, 40 yards).

Defensively, Temple lost the majority of the talent from last year’s team and should give up more points/yards than we have seen from the Owls in the past couple of years. Leading the team in their first game of the season defensively was Isaiah Graham-Mobley (14 tackles, 1 sack), Williams Kwenkeu (11 tackles), and Arnold Ebiketie (10 tackles).

South Florida has played some tough competition this season (Notre Dame & Cincinnati), however, it looks like the Bulls are going to be in for a long season after a 20-point home loss agianst East Carolina last week. Temple is not as strong as we’ve seen in the past couple of years, however, this is a team that generally plays well at home and as I think the South Florida offense, which is averaging just over 14 ppg on the season, is going to struggle in this matchup, I’m taking Temple to cover this home spread. Good Luck! 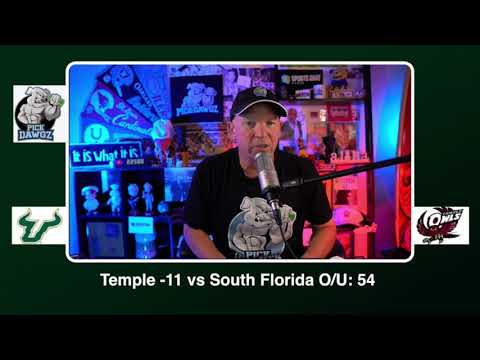