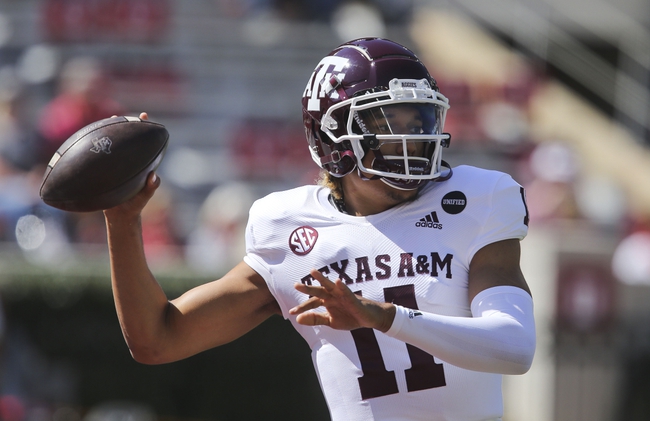 The 11th ranked Texas A&M Aggies will travel to Davis Wade Stadium at Scott Field to take on the Mississippi State Bulldogs this Saturday afternoon in College Football action.

The 11th ranked Texas A&M Aggies improved to 2-1 (2-1 SEC) on the season after upsetting the 4th ranked Florida Gators, 41-38, this past Saturday. Texas A&M trailed Florida by a 38-31 margin with just 6:14 left in the game, however, the Aggies were able to tie the game on an outstanding 51-yard TD reception by Caleb Chapman and was able to get the victory on a 26-yard FG by Seth Small as time expired. Texas A&M outgained Florida by a 543-402 margin in the victory. Leading the way for the Aggies was RB Isaiah Spiller who had 174 rushing yards and 2 TD’s on 27 carries.

The Mississippi State Bulldogs lost their 2nd straight game and dropped to 1-2 (1-2 SEC) after being defeated by the Kentucky Wildcats, 24-2, this past Saturday. Mississippi State and their “Air Raid” offense could not get anything going agianst the Kentucky defense and could not fight back after a pick-six by the Wildcats gave Kentucky a 21-2 lead with just 6:25 left in the 4th quarter. Mississippi State outgained Kentucky by a 295-157 margin, however, committed six turnovers in the lost. Leading the way for the Bulldogs was RB Kylin Hill who had 15 receptions for 79 yards while also adding 17 rushing yards.

On the season, Mississippi State is averaging 20.0 ppg on 442.3 total yards per game (403.7 passing yds/g; 38.7 rushing yds/g). Offensively, the Bulldogs have been led by WR Osiris Mitchell who has 247 receiving yards and 2 TD’s on 14 receptions. QB K.J. Castello has struggled over his last two games and comes into this game having completed 66.1% of his passes for 1,168 yards, 6 TD’s, and 9 INT. The Bulldogs like to throw the football and outside of Osiris Mitchell has been led at the receiver positions by RB Kylin Hill (23 rec, 237 yards, TD), JaVonta Payton (13 rec, 179 yards, TD), Tyrell Shavers (9 rec, 107 yards, TD), and Austin Williams (12 rec, 96 yards, TD). Leading the way for the Bulldogs backfield has been Jo’quavious Marks who had 64 rushing yards on 15 carries.

I will be the first to admit that was fooled by the Mississippi State “Air Raid” attack after their season opening victory against LSU as it’s seems that was more a product of the LSU defense than the Mississippi State offense. Texas A&M picked up a huge win against Florida and has been very solid offensively, led by Kellen Mond and the Aggies passing attack. Texas A&M is one of the better teams in the SEC and as I just can’t trust a Mississippi State offense that has 10 turnovers over their last two games, I’m taking Texas A&M to cover this road spread. Good Luck! 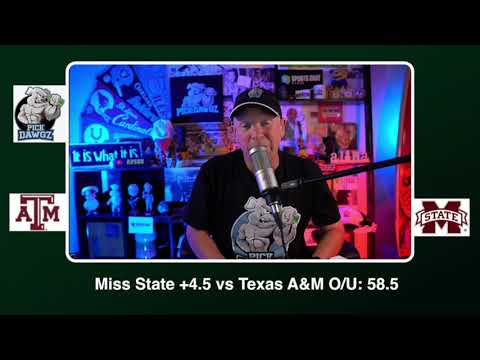