Where to Watch: FSN Stream live sports and exclusive originals on ESPN+. Sign up now!

North Texas started off their season with a victory over Houston Baptist but since that point they have lost three straight games and failed to cover the spread in each of those three games. In the last game against the Charlotte 49ers, the defense really struggled giving up 49 points and that led to the loss. Each of the last three games Mean Green have given up at least 41 points and even against Houston Baptist they gave up 31 points. At quarterback, North Texas is led by Austin Aune who has thrown for  1,108 yards, eight touchdowns, and two interceptions.

On the other side of this matchup is the Middle Tennessee Blue Raiders who have one win, but they really struggled to start the season losing each of their first three games. In the last game against FIU they finally got their season on the right track putting up 31 points and that was enough to come away with a three-point victory. This is an offense that has been inconsistent at best and just two games ago against Western Kentucky, they scored only 17 points. In this game if they want any chance to come away with a win, the Blue Raiders, need to find a way to get the offense going. 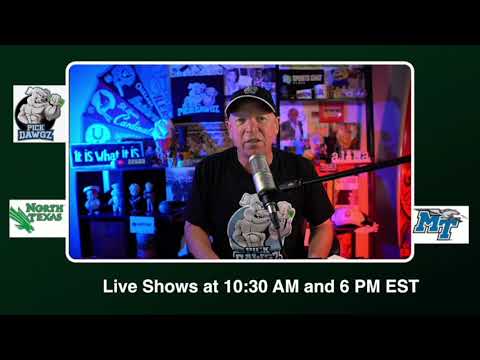