The Missouri Tigers and the LSU Tigers face off on Saturday in an SEC college football showdown at Tiger Stadium.

The Missouri Tigers have played two teams so far this year in Tennessee and Alabama and they lost both games. Even though they haven’t looked great so far this year, they were able to cover the spread against the Alabama Crimson Tide. Each of the last two games, Missouri hasn’t had an elite offensive performance, In the last game against the Volunteers the offense really struggled scoring only 12 points and that led to the loss. The Tigers have used both Connor Bazelak and Shawn Robinson have both gotten playing time this season and they both probably will play in this game. If Missouri wants to win this game, they need the defense to step up.

On the other side of this matchup is the LSU Tigers who lost their first game of the season against Mississippi State but in the last game against Vanderbilt the offense looked good putting up 41 points and that led to a victory. Quarterback Myles Brennan looked good in the last game throwing for 337 yards, four touchdowns, and one interception. This is a defense that clearly has some holes, and this will be a test for them that they need to have success in. Anything over 20 points would be a big disappointment for a team that still has high expectations for the season.

LSU looked good in the last game and they are going to have no issue running up the score in this game. Look for Missouri to have no answer as LSU runs up the score and the home team will win this game and cover the spread.  In terms of the total it's a lean to the over based on how many points LSU is going to score. 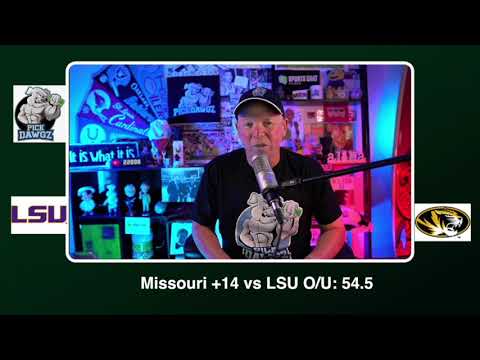