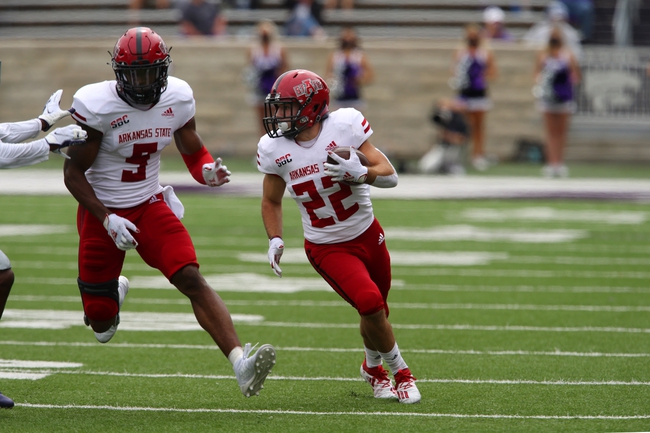 The Central Arkansas Bears will travel to Centennial Bank Stadium to take on the Arkansas State Red Wolves this Saturday afternoon in College Football action.

The Arkansas State Red Wolves dropped to 1-2 (0-1 Sun Belt) on the season after being defeated by the Coastal Carolina Chanticleers, 52-23, this past Saturday. Arkansas State held a 14-7 lead after the 1st quarter, however, the Red Wolves struggled on both sides of the ball for the remainder of the game and couldn’t fight back after 24 unanswered points by the Chanticleers gave Coastal Carolina a 31-14 lead with 6:57 left in 3rd quarter. Arkansas State was outgained by a 539-385 margin and committed two turnovers in the loss. Leading the way for the Red Wolves was WR Brandon Bowling who had 7 receptions for 115 yards and 2 TD’s.

Arkansas State had one of the bigger statement wins in program history against Kansas State, however, after two weeks off due to postponed games, looked like a different team against Costal Carolina who had no trouble putting up points against the Red Wolves. Central Arkansas is a solid FCS program which looked decent agianst a very North Dakota State team, however, I think the Red Wolves are far better team here and that they bounce back with a 3-TD victory at home in this one. Take Arkansas State to cover. Good Luck!