The Charlotte 49ers and Florida Atlantic Owls face off in a Week 5 college football showdown at FAU Stadium.

The Charlotte 49ers have played only one game because COVID cancelled their other game so they have had a bit of a break heading into this game. Charlotte’s first game of the season was against the Appalachian State Mountaineers and the offense wasn’t good enough as they were knocked off 35-20. The 49ers actually had a 7-0 lead after the first but the defense didn’t do a whole lot after that and it led to the loss. The 49ers are led by quarterback Chris Reynolds who threw for 140 yards, zero touchdowns, and two interceptions. In this game the 49ers need to work on the turnovers or this game is going to be another big loss.

On the other side of this matchup is the Florida Atlantic Owls who were already supposed to play two games this season, but COVID concerns that led to both games being cancelled. The Owls season last year was successful finishing the game with an 11-3 record and 7-1 during conference play. The Owls have brought in Willie Taggert and he should be an elite hire for the school. Last season the offense was elite putting up 36 points per game. Quarterback Chris Robinson is back and he had a strong season last year.. IF FAU wants to reach their goals this year, Robinson needs to have a big game in this one and a big year.

FAU is playing their first game so there is a bit of concern with that, but they still should get their season off to a fast start. Look for FAU’s offense to run up the score, Charlotte to have no answer, and that will lead to FAU winning the game and covering the spread. 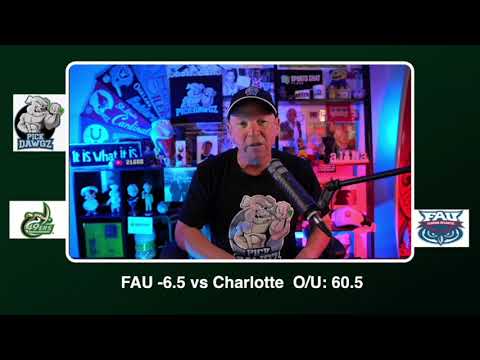