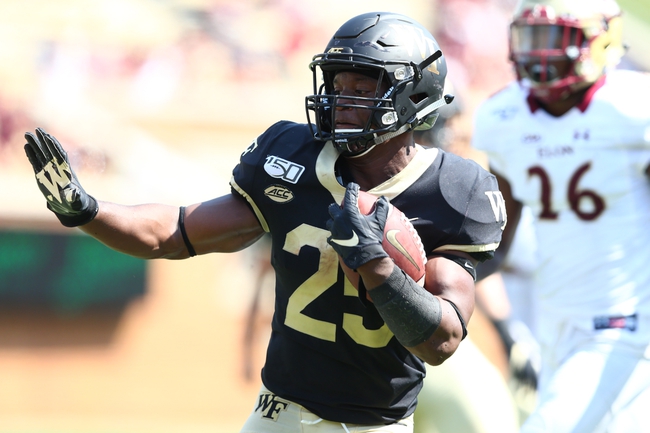 The Campbell Fighting Camels will travel to Truist Field to take on the Wake Forest Demon Deacons this Friday night in College Football action.

The Campbell Fighting Camels dropped to 0-3 on the season after being defeated by the Appalachian State Mountaineers, 52-21, this past Saturday. Campbell, who plays in the FCS, gave the heavily favorite Mountaineers a run for their money in the 1st half as they went into halftime trailing by just a 17-13 margin, however, the Camels had no answers defensively in the 2nd half, allowing the Mountaineers to pull away by scoring 35 unanswered points. Campbell was outgained by Appalachian State by a 535-305 margin in the loss. Leading the way for Campbell was QB Hajj-Malik Williams who completed 7 of 19 passes for 101 yards, while also adding 44 yards & 2 TD’s on the ground.

The Wake Forest Demon Deacons dropped to 0-2 on the season after being defeated by the NC State Wolfpack, 45-42, on September 19th. In a tight, back and forth game, Wake Forest could not fight back after a three-yard TD run by NC State’s Ricky Person Jr. gave the Wolfpack the lead for good with 5:51 left in regulation. Wake Forest was outgained by the NC State by a 463-385 margin and committed one turnover in the loss. Leading the way for the Demon Deacons was RB Kenneth Walker III who had 131 yards and 3 TD’s on 27 carries.

Campbell has made the most of their opportunity with their 4-game schedule as although they are 0-3, the Fighting Camels have been competitive and are a perfect 3-0 ATS in those games. Wake Forest is a Power 5 school that will have a clear advantage in talent, however, this is a Demon Deacons team that is going to struggle this season after losing a bunch of offensive talent from last year’s squad. Wake Forest is going to win this game, however, I think the Fighting Camels will be able to put up a few points on the Demon Deacons defense and I think they cover once again with the large amount of points. Good Luck!