Where to Watch: ESPN U Stream live sports and exclusive originals on ESPN+. Sign up now!

The UTEP Miners will travel to Malone Stadium to take on the UL Monroe Warhawks this Saturday afternoon in College Football action.

The UTEP Miners improved to 2-1 (0-0 C-USA) after defeating the Abilene Christian Wildcats, 17-13, this past Saturday. UTEP fell behind early, however, scored 10 unanswered points to take a 10-7 lead at halftime and was able to hold off the Wildcats after a 4-yard TD run by Ronald Awatt gave the Miners a 17-10 lead early in the 4th quarter. UTEP was outgained by Abilene Christian by a 308-293 margin, however, did win the turnover battle by a 2-0 margin in the victory. Leading the way for the Miners was RB Josh Fields who had 75 rushing yards and a TD on 17 carries.

The UL Monroe Warhawks dropped to 0-2 (0-1 Sun Belt) on the season after being defeated by the Texas State Bobcats, 38-17, this past Saturday. UL Monroe had no answers on the defensive end early against Texas State and could not fight back after going into halftime trailing by a 31-14 margin. UL Monroe outgained Texas State by a 444-398 margin, however, did lose the turnover battle by a 2-1 margin in the loss. Leading the way for the Warhawks was QB Colby Suits who completed 35 of 53 passes for 377 yards, 2 TD, & 1 INT.

UL Monroe is the better overall football team in this match-up, however, I do not love backing a Warhawks team that is favored by more than a touchdown that is coming off a 21-point home loss to Texas State. UTEP is led by their backfield which should have some success against a Warhawks defense that has had no answers agianst the run in their first two games and I think the Miners do enough to cover with the points. Good Luck! 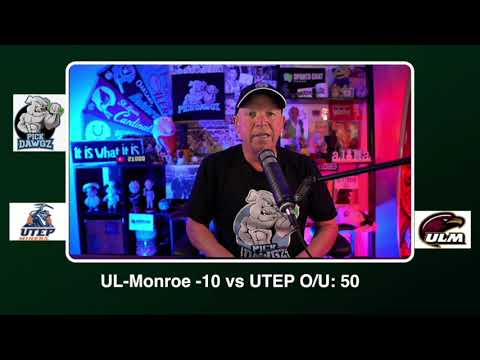