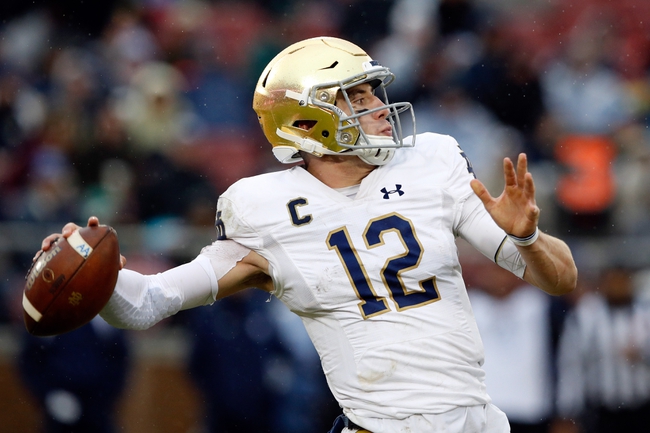 Update - Notre Dame has had multiple players test positive for COVID-19 and the game has been postponed and has been rescheduled for December 12th.

The 7th ranked Notre Dame Fighting Irish improved to 2-0 (1-0 ACC) on the season after defeating the South Florida Bulls, 52-0, this past Saturday. Notre Dame put this game away early and had not trouble cruising to victory after taking a 28-0 lead with 11:15 left in the 2nd quarter. Notre Dame dominated South Florida on both ends of the field as the Fighting Irish outgained the Bulls by a 429-231 margin in the victory. Leading the way for the was QB Ian Book who completed 12 of 19 passes for 143 passing yards while also adding three rushing TD’s.

The Wake Forest Demon Deacons dropped to 0-2 on the season after being defeated by the NC State Wolfpack, 45-42, this past Saturday. In a tight, back and forth game, Wake Forest could not fight back after a three-yard TD run by NC State’s Ricky Person Jr. gave the Wolfpack the lead for good with 5:51 left in regulation. Wake Forest was outgained by the NC State by a 463-385 margin and committed one turnover in the loss. Leading the way for the Demon Deacons was RB Kenneth Walker III who had 131 yards and 3 TD’s on 27 carries.

Notre Dame looked like a top-10 team agianst South Florida and should be able to continue to roll agianst a Wake Forest team that I think is going to be in for a long season. Wake Forest has had no answers defensively in their first two games and as the Demon Deacons are nowhere near as dynamic on the offensive end as they were last year, I think they struggle to put up points in this one allowing Notre Dame to cover this big spread. Good Luck.

Brett’s Pick Game Has Been Postponed - Rescheduled For December 12th