The NC State Wolfpack and Virginia Tech Hokies face off Saturday in a college football showdown at Lane Stadium. Virginia Tech have won the last four games played between the two teams but the last time that happened in 2015.

The Virginia Tech Hokies had high expectations heading into the 2019 season but they couldn’t live up to the expectations. After the disappointing year the Hokies had a lot of players transfer out including leading receiver Damon Hazelton who went off to Miami. The Hokies did have a few players transfer including Evan Fairs who might not be a standout, but should play at least some sort of role. The team also brought in Khalil Herbert who is going to be a gamechanger for this team on the ground after being a standout for Kansas. On the defensive side the Hokies weren’t great, but they were good most games, they just have to avoid the blowup game.

On the other side of this matchup is the NC State Wolfpack who played their first game of the season against the Wake Forest Demon Deacons and it was a competitive game throughout but NC State was able to come away with a 45-42 victory. The Wolfpack are a run first team and in the first game they had two different rushers put up at least 97 yards on the ground. Zonovan Wright put up 97 yards and a touchdown while Ricky Pearson Jr had 99 yards and two touchdowns. The Wolfpack were expected to have a strong defense this year, but in the first game that didn’t live up to the expectations.

The under is 11-5 in NC State’s last 16 games as an underdog. Virginia Tech is 2-7 against the spread in their last nine games as a favorite. The over is 7-3-1 in Virginia Tech’s last 11 conference games.

Virginia Tech hasn’t played yet and NC State having a game under their belt and that is going to help them in this one.In this game look for NC State to have a big game and that will lead to them covering the spread. I will also be putting a few dollars on NC State on the money line. 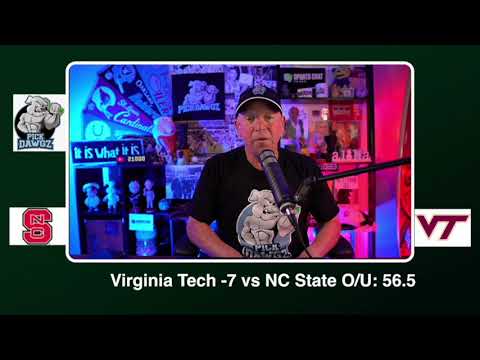