The Georgia Bulldogs and the Arkansas Bulldogs face off on Saturday in an SEC college football showdown at Razorback Stadium. The visiting team has won the last three games played between the two teams but the last time they played was in 2014.

Georgia finished last season with 12 wins, but this team is going to look a lot different this season, but the expectations haven’t changed. On defense, six of last years starters were drafted which means there are going to be a lot of young guys filling in. Jamie Newman was brought in offseason to be the starting quarterback but he has opted out. The team hasn’t announced a starter yet, but it seems that JT Daniels could be the first guy in line, a former USC standout. On defense, the Bulldogs did lose Tae Crowder, but they have a lot of other talent back, and that should be the strength of this team. In this game look for the defense to really try to make a statement, and if Georgia can get out big, don’t be shocked if they try to run up the score.

On the other side of this matchup is Arkansas Razorbacks  who brought in Kendal Briles to hopefully turn around this team and he is a strong offensive coordinator. The good news for Arkansas is they should have better quarterback play this year. Former Florida standout Feleiple Franks looks to be the starting quarterback for this season. Last season Franks threw for 4,593 yards, 38 touchdowns and 17 interceptions. Arkansas’s defense was terrible last season but it is Barry Odom who should help improve that group. The strength of the Razorbacks defense is going to be the linebackers corps. To win this game Arkansas needs to get good play from their defense.

This is too big of a number, and Franks is going to be a big addition to the team. Georgia is still going to win this game, but Arkansas will cover the spread. 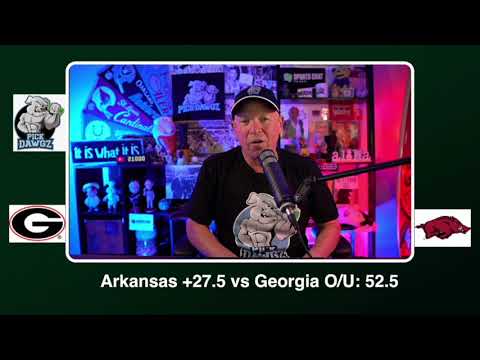