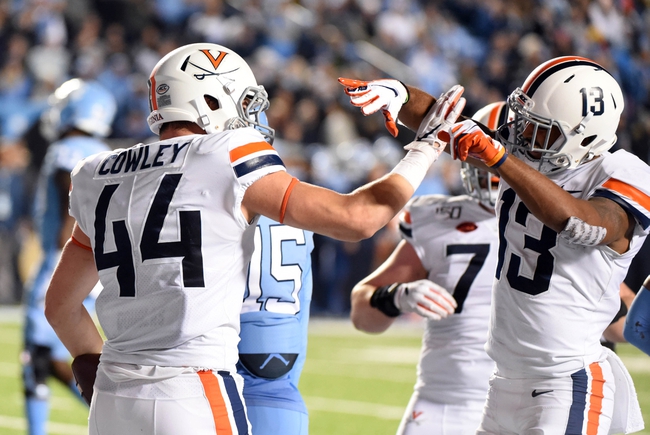 The Duke Blue Devils will travel to David A. Harrison III Field at Scott Stadium to take on the Virginia Cavaliers this Saturday afternoon in College Football action.

The Duke Blue Devils dropped to 0-2 (0-1 ACC) on the season after being defeated by the Boston College Eagles, 26-6, this past Saturday. Duke’s offensive struggled with turnovers agianst Boston College and could not fight back after the Eagles took a 23-6 lead late in the 3rd quarter on a 61-yard TD pass. Duke was outgained by Boston College by a 384-351 margin and lost the turnover battle by a 5-1 margin in the loss. Leading the way for the Blue Devils was RB Mataeo Durant who had 59 rushing yards and a TD on 5 carries.

The Virginia Cavaliers kick off their 2020 system looking to continue the momentum that build last season which saw the Cavaliers post a 9-4 record and 6-2 ACC record. Virginia had some quality wins last season agianst Florida State & Virginia Tech, however, could not pull a win in the Orange Bowl, falling to the Florida Gators in a competitive 36-28 game.

Virginia was led last season but an outstanding offense that averaged 32.1 ppg, however, the Cavaliers will no longer have their star QB, Bryce Perkins who threw for 3538 yards, 22 TD, and 11 INT last season while also adding 769 yards and 11 TD’s on the ground. Replacing Perkins will be Brennan Armstrong who in limited time last season, completed 15 of 20 passes for 196 yards, 1 TD, and 2 INT. Virginia will be returning their top RB in Wayne Taulapapa who averaged about 40.0 rushing yds/g and had 12 TD’s on the season. Virginia returned their entire starting offensive line and coming back for the receivers will be Terrell Jana (74 rec, 886 yards, 3 TD) & Tavares Kelly Jr. (14 rec, 152 yards, TD).

Defensively, Virginia allowing their opponents to average 27.1 ppg on 371.9 total yards per game and should be even better this season with a bunch of experience returning. Leading the defense will be LB’s Zane Zandier & Noah Taylor along with safety Joey Blount.

Duke’s defense has been decent this season, but it has been a struggle offensively as the Blue Devils have put up just 19 points on the season and has already committed 7 turnovers. Virginia has some question marks on the offensive end now that Bryce Perkins is gone, however, as the Cavaliers still have some playmakers on the offensive end and should be solid defensively team, I’m initially leaning on taking Virginia to cover this mid-range spread.