The Florida Atlantic Owls will travel to Allen E. Paulson Stadium to take on the Georgia Southern Eagles this Saturday afternoon in College Football action.

The Florida Atlantic Owls had an outstanding 2019 season, finishing the season with an overall record of 11-3 (7-1 C-USA) which including both a C-USA Championship and a Bowl victory. FAU finished the regular season winning 10 of their last 11 games and had no trouble with the SMU Mustangs in a 52-28 victory in the Cheribundi Boca Raton Bowl. In the offseason, Lane Kiffin decided he had enough time at non-Power 5 school and took a job with Ole Miss, however, the Owls were able to get another high-profile coach to take his place in Willie Taggart.

On the offensive end, Florida Atlantic averaged 36.4 ppg on 448.6 total yards per game (282.6 passing, 166.0 rushing). Florida Atlantic will not have QB Chris Robinson back due to some off-field issues which is a big blow of the Owls offense after finishing last season completing 61.8% of his passes for 3701 yards, 28 TD’s, & 6 INT. Currently, there is a battle for the starting QB job for the Owls that includes Nick Tronti and Willie Taggart Jr. Returning for the Owls for receivers will be John Mitchell (38 rec, 488 yards, 5 TD) & Willie Wright (20 rec, 186 yards, 2 TD) and will also have former Miami Hurricane TE, Michael Irvin II. In the backfield, Florida Atlantic will return their leading rusher in Malcolm Davidson (102 att, 711 yards, 9 TD).

Defensively, Florida Atlantic held their opponents to an average of 22.7 ppg on 238.71 total yards per game (135.5 rushing yds/g; 238.71 passing yds/g). The Owls will no longer have LB Rashad Smith, however, have an excellent player in DE/LB Leighton McCarthy.

Defensively, Georgia Southern allowed their opponents to average 28.2 ppg last season and really had no answers for Campbell’s duel-threat QB Hajj-Malik Williams who accounted for 310 total yards (237 passing; 73 rushing) and 3 TD’s. Leading the way for the Eagles defense was Raymond Johnson III who had four tackles and two sacks.

The line has yet to be released for this game as we can assume that the odds makers are waiting to try and determine if Georgia Southern will be once again without about half their team. As of right now, you would have to think FAU is going to be a heavy favorite and it would be hard to go against the Owls after seeing the performance that Georgia Southern put up agianst Campbell this past Saturday. Please check back when the line is released.

Brett’s Pick This game has been postponed. 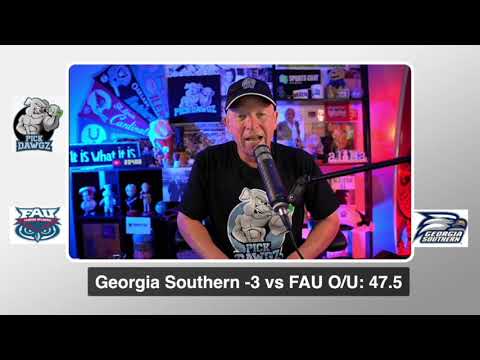