The Louisiana Ragin Cajuns will travel to MidAmerican Energy Field at Jack Trice Stadium to take on the 23rd ranked Iowa Stats Cyclones this Saturday afternoon.

The Louisiana Ragin Cajuns finished their 2019 season with an overall record of 11-3 (7-1 Sun Belt) which included an impressive 27-17 victory over the Miami (OH) RedHawks in the LendingTree Bowl.

Offensively, Louisiana was outstanding last season, averaging 37.9 ppg on 494.4 total yards per game. The Ragin Cajuns has a balanced attack on the offensive end, as Louisiana averaged 257.4 rushing yards per/game & 236.7 passing yds/game and with the important pieces returning for the offense, the Ragin Cajuns should have one of the more explosive offenses in all of College Football. Leading the offense will be the RB duo of Elijah Mitchell and Trey Ragas who combined for almost 2,000 rushing yards and 27 TD’s last season. The Ragin Cajuns also return QB Levi Lewis who completed 64.3% of his passes for 3,050 yards and 26 TD’s. Lewis will no longer have Ja’Marcus Bradley at WR, but the Ragin Cajuns do bring back their second leading WR from last season in Jamal Bell.

Defensively, Louisiana held their opponents to an average of 19.7 ppg on 371.8 total yards per game (174.4 rushing yds/game; 197.7 passing yds/game). The Ragin Cajuns will no longer have LB Jacques Boudreaux, however, they do have eight returning starters led by LB Joe Dillon & Percy Butler.

The 23rd Iowa State Cyclones finished their 2019 season with an overall record of 7-6 (5-4 Big 12) which included a 33-9 loss to the Notre Dame Fighting Irish in the Camping World Bowl. Iowa State barley survived an upset bid by FCS Norther Iowa to kick off the season and struggled agianst better competition as they finished just 1-3 agianst top-25 ranked teams.

Offensively, Iowa State averaged 32.2 ppg on 444.3 total yards per game. The Cyclones was led by their passing attack which averaged 311.3 passing yds/game and accounted for 29 TD’s last season. Iowa State comes into this season with high expectations for the offense as they return QB Brock Purdy who completed 65.7% of his passes for 3,982 yards and 27 TD’s. Purdy will not longer have Deshaunte Jones at WR, however, they do bring back some experience Tarique Milton & Chase Allen. Leading the backfield will be Breece Hall who had 956 rushing yards and 9 TD’s last season.

Defensively, Iowa State allowing their opponents to average 25.9 ppg on 369.3 total yards per game (139.5 rushing yds/game; 229.8 passing yds/game). The defense gave up some points last season, however, it was still was solid overall despite having issues creating turnovers. Iowa State should be strong at LB this season with Mike Rose & O’Rien Vance and have one of the better safety’s in the Big 12 in Greg Eisworth.

Iowa State is ranked in the top-25 and have one of the better QB in the country in Brock Purdy, however, I think the Cyclones are going to have their hands full in their season opener agianst a Louisiana team that could be the best in the Sun Belt this season. Louisiana should have some success on the offensive end and as I think they’ll eat up a lot of clock with their RB duo of Elijah Mitchell & Trey Ragas, I think the Ragin Cajuns do enough with the points to cover this spread. Good Luck! 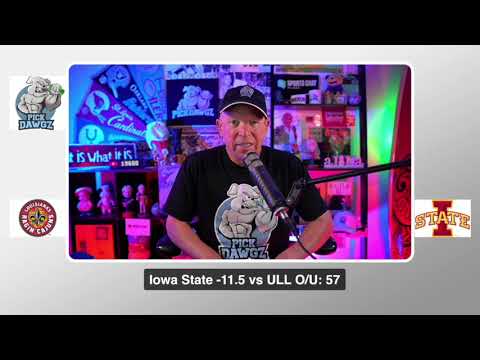