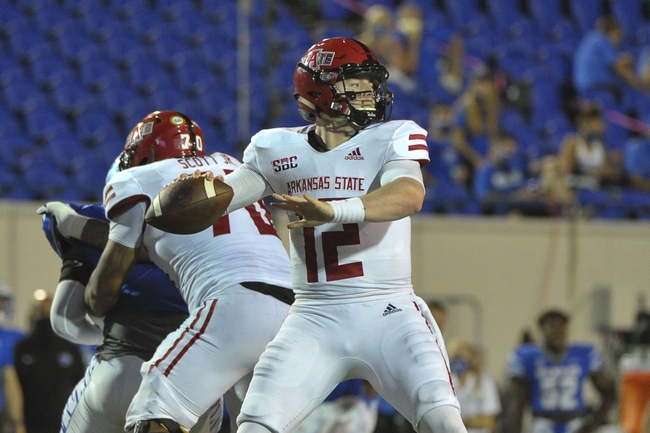 The Arkansas State Red Wolves and Kansas State Wildcats face off in a non-conference showdown at the Bill Snyder Family Stadium.

The Kansas State Wildcats found some success last year under first year head coach Chris Klieman who found a whole lot of success with North Dakota State.Even though they won eight games, the offense was inconsistent at best, and they need to be better. Under center this season for the Wildcats will be Skylar Thompson who probably won’t have a job in the NFL, but he is still a solid quarterback. Last season, Thompson threw for 2,315 yards, 12 touchdowns, and five interceptions. The other big concern this season on offense has to be the offensive line who have a couple of pieces they need to fill.

On the other side of this matchup is the Arkansas State Red Wolves who have already played one game so far this season against the Memphis Tigers. In that game, Arkansas State was actually leading at the end of the first quarter, but the defense let them down in the 2nd and 3rd quarter and that led to a 37-24 defeat. On offense the Red Wolves used two quarterbacks in the 1st game, and that should be the case again in this one. Logan Bonner threw for 133 yards, one touchdown, and two interceptions. Layne Hatcher threw for 166 yards but he didn't have any touchdowns or interceptions. On defense Arkansas State really struggled, letting the Memphis Tigers do whatever they wanted. The Red Wolves allowed 275 yards through the air.

Arkansas State’s offense found some success in the first game and that will continue in this game. They might not do enough to pull off the upset, but Memphis has a better offense than Kansas State will be this season. Back Arkansas State to cover the spread.