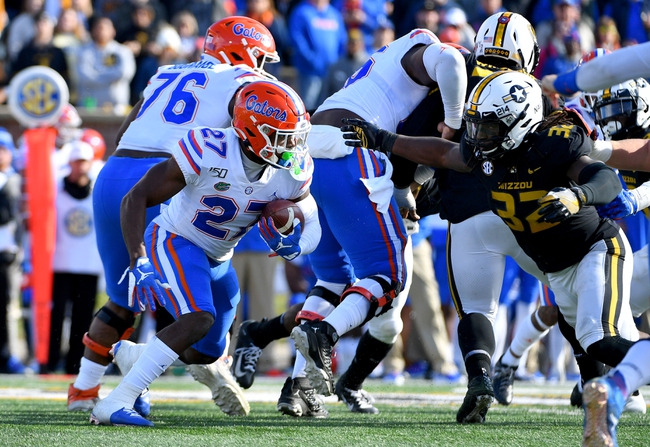 The Missouri Tigers are on the road for a SEC battle with the Florida Gators.  This matchup will take place on November 14, 2020.  Missouri finished the 2019 season with an overall record of (6-6), while Florida went (11-2).  The two teams met last season, as Florida came away with a road victory, 23-6.  Let’s take a closer look at both programs.  Get College Football predictions at Pick Dawgz.

Missouri will be looking to change their fortunes this season, as the Tigers are under the direction of former Appalachian State head coach, Eli Drinkwitz. In the contest last season, Missouri was out-gained on offense 386-256.  The Tigers lost the 2nd half battle, being out scored 17-3.  This Missouri team will look different than last year's team, as the team will have a new starting quarterback and running back.  If Missouri wants to have a chance in this game, the Tigers will need their defense to mirror the success from a year ago.  Missouri had a top 20 defense in allowing the fewest points at the FBS level.  For more on Missouri, check out the team preview.

Florida was forced to go a different route at quarterback last season, due to an injury to Feleipe Franks.  Luckily for coach Dan Mullins, Kyle Trask stepped in and thrived in the situation.  Trask passed for nearly 3,000 yards a season ago.  Trask had a good game against Missouri during 2019, passing for 282 yards, completing 23 of 35 passes, while also adding 2 passing touchdowns. The Gators did not have any issue getting to opposing quarterbacks last season, finishing the season with 49 sacks.  The Florida defense totaled 4 sacks and had 8 tackles for a loss in the win over Missouri last season.  For more on Florida, check out the team preview.

Overview: Florida has opened up as a decently large favorite.  Oddsmakers have given Florida a 17.5 point edge in this home SEC tilt against Missouri.  This opening spread is about what the difference was a year ago, as Florida won by 17 against Mizzou in 2019.  While I do believe Eli Drinkwitz will be able to come in and change the identity of Missouri football, with this being an early prediction, I’m siding with Florida to cover this spread at home.  Missouri should finish with more wins than their 2019 win total, but not knowing how the quarterback situation will unfold, it’s too dicy to give Missouri a cover in this spot.

Get Premium Picks Start Winning Now »
The pick in this article is the opinion of the writer, not a PickDawgz site consensus.
Previous Pick
Mississippi State at Ole Miss - 11/26/20 Early look College Football GOY Picks and Predictions
Next Pick
KT Wiz Suwon vs. NC Dinos - 7/19/20 KBO Baseball Pick and Prediction