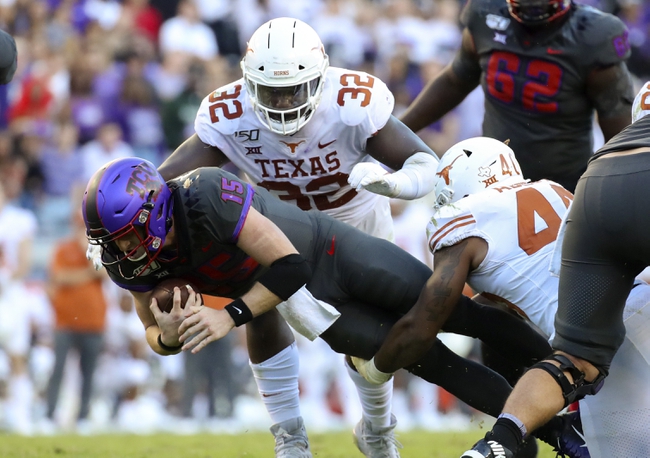 The TCU Horned Frogs are on the road for a Big 12 tilt with in-state foe, the Texas Longhorns.  This game will be played on November 14, 2020.  TCU finished the 2019 season with an overall record of (5-7), while Texas went (8-5).  The two teams met last season, as Texas fell on the road to TCU, 37-27.  Texas was ranked 15th at the time of the meeting last season.  Let’s take a closer look at both programs. Get College Football predictions at Pick Dawgz.

TCU will be looking for another solid performance out of quarterback Max Duggan.  Duggan passed for 273 yards as a freshman in a win over nationally ranked Texas last season.  Duggan completed 19 of 27 passes, while also being responsible for 3 touchdowns.  Overall the quarterback passed for more than 2,000 yards on the season.  Duggan sealed the deal last season, with an 11 yard touchdown run with under 2 minutes to go in the 4th quarter, to give TCU a two score advantage.  The backfield will need to be solid, if TCU wants to have back to back upset wins over Texas.  TCU will be turning to transfer running back Emari Demercado.  For more on TCU, check out the team preview.

Texas will no doubt be looking for a redemption game in this matchup against TCU.  The Longhorns should be one of the better teams in the Big 12 during 2020.  Texas will be guided by quarterback Sam Ehlinger.  Ehlinger was instrumental in helping Texas average over 35 points per game on offense a year ago.  The quarterback passed for more than 3,600 yards, while throwing 32 touchdowns.  The Longhorns will be a little short handed in the receiving core, as Texas lost their top two wideouts from last season.  For more on Texas, check out the team preview.

Overview: Texas has opened up as 13.5 point favorites in this in-state matchup with TCU.  TCU struggled last season, but still managed to have quite a few players taken during the 2020 NFL Draft.  Texas is at home for this contest and will need no motivation to get psyched up for this contest.  I look for Texas to be one of the best teams in the Big 12 this season and should be able to come away with a few easy wins.  This is a game that I see Texas being able to get the job done, with little to no stress involved.  I'll put stock in Texas to cover this spread at home.