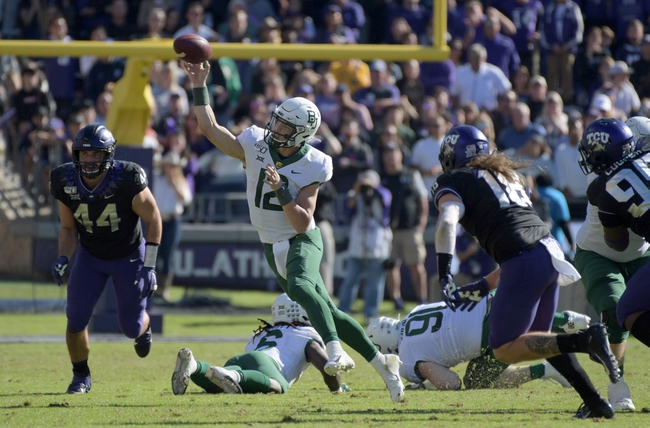 The Line: Baylor -1.5 -- Over/Under: Click Here for the Latest Odds

The TCU Horned Frogs are on the road for a Big 12 matchup with the Baylor Bears.  TCU finished the 2019 season with an overall record of (5-7), while Baylor went (11-3).  Baylor won the meeting during the 2019season, knocking off TCU 29-23 in triple OT.  Let’s take a closer look at both programs.  Get College Football predictions at Pick Dawgz.

TCU had an odd season during 2019, as the Horned Frogs finished with a losing record, but still managed to have more than a few players taken during the 2020 NFL Draft.  The program does welcome back quarterback Max Duggan.  Duggan passed for over 2,000 yards as a freshman, while adding 15 passing touchdowns.  TCU will have a new look in the backfield, as the program saw two running backs graduate.  Therefore, the coaching staff was able to land a transfer from Saddleback College.  TCU will need to find some success in the passing game, but may see hiccups at times, as there isn’t much experience returning.  For More on TCU, check out the team preview.

Baylor is in a different boat than TCU.  While the Bears will be under the direction of a new head coach, Baylor still has the luxury of quarterback Charlie Brewer. Brewer passed for over 3,100 yards last season and will be looked at to guide this offense to success once again.  New head coach Dave Aranda will need to be creative this season, as the program will be looking for younger players from last season to step up, as the program lost star wideout Denzel Mims.  Mims went over the 1,000 yard mark in receiving yards last season.  For more on Baylor, check out the team preview.

Overview: Oddsmakers have tagged Baylor as a small 1.5 favorite at home in this Big 12 contest.  Baylor should be able to put up their fare share of points on the season, thanks to quarterback Charlie Brewer.  This should also be the case for this game.  The Bears face a TCU team that will be in rebuilding mode at certain positions, as the program lost a decent amount to the NFL.  Brewer should be able to lead this team to another successful season and one of those wins will be against TCU.  I’ll take Baylor to cover this small spread.