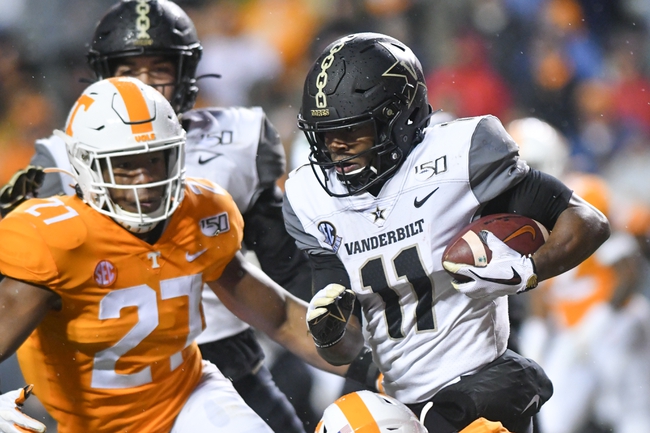 The Line: Tennessee -14.0 -- Over/Under: Click Here for the Latest Odds

The Tennessee Volunteers are on the road to wrap up the regular season at SEC member, the Vanderbilt Commodores.  Tennessee finished the 2019 season with an overall record of (8-5), while Vanderbilt went (3-9).  The two teams met last season, as Tennessee secured a 28-10 win at home.  Let’s take a closer look at both programs.  Get College Football predictions at Pick Dawgz.

Tennessee will be looking for another strong performance out of running back Eric Gray.  Gray rushed for nearly 250 yards and 3 scores in the meeting last season against Vanderbilt.  Quarterback Jarrett Guarantano struggled last season in the game against Vanderbilt, completing just 6 of 17 passes for 120 yards, while throwing 1 touchdown and 1 pick. The Volunteers had a solid defense last year, ranking inside the top 30 in fewest points allowed.  However, the program will need players to step up on defense, as the top defensive players from last year have moved on.  For more on Tennessee, check out the team preview.

Vanderbilt struggled once again last season and only managed to score 10 points against Tennessee last year.  Quarterback Riley Neal is gone, as Vanderbilt will be inserting a different quarterback this season.  The Commodores also lost their 1,000 yard rusher in Ke’Shawn Vaughn.  Vaughn rushed for 1,028 yards and 9 scores.  The offense will turn to running back Keyon Brooks and wideout Cam Johnson to hope turn the tide for the Vanderbilt football program.  For more on Vanderbilt, check out the team preview.

Overview: Oddsmakers have given Tennessee a 14 point cushion as the early spread has been released.  The Volunteers certainly return more talent on the offensive side of the ball than Vanderbilt does.  Tennessee may have lost key playmakers on defense, but Vanderbilt lost their core offensive players from a 3 win team from 2019.  The Tennessee defense should be able to do enough to limit the damage, as the Volunteers program is a few tiers ahead of the Commodores. I’ll side with Tennessee to get the job done on the road, as the Volunteers will cover this 14 point spread.