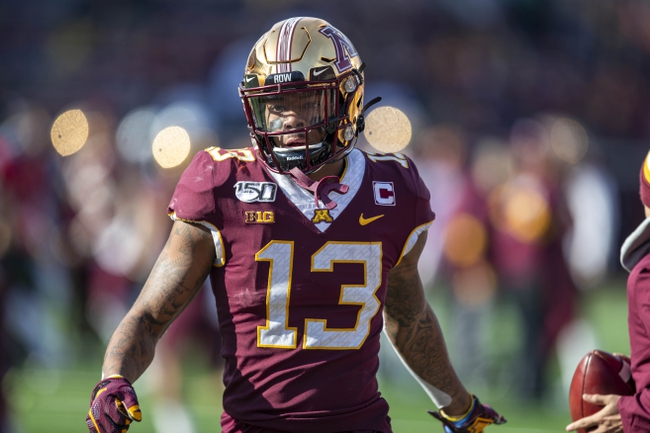 The Line: Wisconsin -7.5 -- Over/Under: Click Here for the Latest Odds

The Minnesota Golden Gophers make the trip to Camp Randall to take on the Wisconsin Badgers in early October. Minnesota is coming off a historic season in 2019 when they finished with an 11-2 record, including a win over the Auburn Tigers in the Outback Bowl. Wisconsin went 10-4 that included another appearance in the Big Ten title game. Wisconsin knocked off Minnesota last year at TCF Bank Stadium. Paul Bunyan’s Axe will be on the line in this game.  Get Free College Football Picks all season long at PickDawgz.

After such a successful season during the 2019 season, there are dreams of making the Big Ten title game. To get to the Big Ten title game, Minnesota is probably going to need to beat Wisconsin. Gone is Tyler Johnson and Antonie Winfield, but this is still a very talented team that is coming back. The two big stars on offense is Tanner Morgan and Rashod Bateman who hope to be connecting a lot this season.

The offense is the talking point, but this is also a defense that is good. In this game if they can make Wisconsin one dimensional, the Gophers will be in good shape to come away with a victory.

The Wisconsin Badgers biggest question heading into the 2020 season is how are they are going to replace Jonathan Taylor. This is still going to be a run-first team, but Jack Coan is going to be asked to do a lot more under center. On defense in this game, the Badgers are going to need to find a way to slow down Bateman and Morgan. The Gophers are also a strong running team, but the Badgers need to focus on taking away the pass first.

Losing Taylor is a big loss for the Badgers, and the Gophers defense is going to step up in this game. Tanner Morgan has had success against the Badgers before, and it will happen again in this game. The Badgers are 7.5 point favorites and that line is off, by a lot. Look for Minnesota to run up the score and that will be the difference. Minnesota on the money line is a strong play, but if you would rather take the points, that is a really good play too.