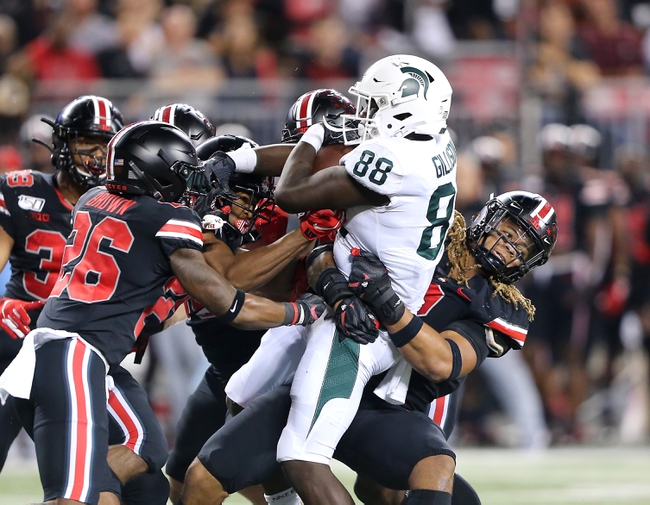 The Ohio State Buckeyes are on the road for a Big Ten clash with the Michigan State Spartans, on October 17, 2020.  Ohio State finished the 2019 season with an overall record of (13-1), while Michigan State went (7-6).  The two teams met up last season, as Ohio State came out on top, 34-10.  Let’s take a closer look at both programs.  Get College Football predictions at Pick Dawgz.

Ohio State will be hoping to keep the same beat on offense, as quarterback Justin Fields is back for a junior campaign.  Fields is the leader on this offense, with J.K. Dobbins, K.J. Hill, and Binjimen Victor played their last collegiate season last year.  Fields had a solid game a year ago against Michigan State, passing for 206 yards, while throwing 2 touchdowns and adding another on the ground.  Look for the Buckeyes coaching staff to get running back Master Teague III involved early in this matchup.  The defense will not be the same as last year, as Ohio State saw their top 3 defensive players get drafted in the 1st round.  For more on Ohio State, check out the team preview.

Michigan State does not have the same luxury as Ohio State, as the Spartans will have a new quarterback under center for the 2020 season.  Michigan State will be guided by quarterback Rocky Lombardi.  However, the offense does welcome back running back Elijah Collins.  Collins rushed for nearly 1,000 yards, while contributing 5 touchdowns on the ground.  The offense also lost two wideouts to the NFL.  The defense even lost a top notch pass rusher from the 2019 campaign.  Michigan State is for sure to look different during the 2020 season.  For more on Michigan State, check out the team preview.

Overview: Ohio State has opened up as 21 point favorites in this road game at Michigan State.  These two teams are on complete opposite sides of the spectrum going into 2020.  While the Buckeyes did lose a few hey guys on offense, Justin Fields is back and will be able to help the underclassman grow during the 2020 season.  On the other hand, Michigan State looks to regress from the 2019 campaign.  The Spartans lost the majority of their offense and a losing record during this season is very possible.  I’ll side with Ohio State to dominate this game and ultimately cover the spread on the road.