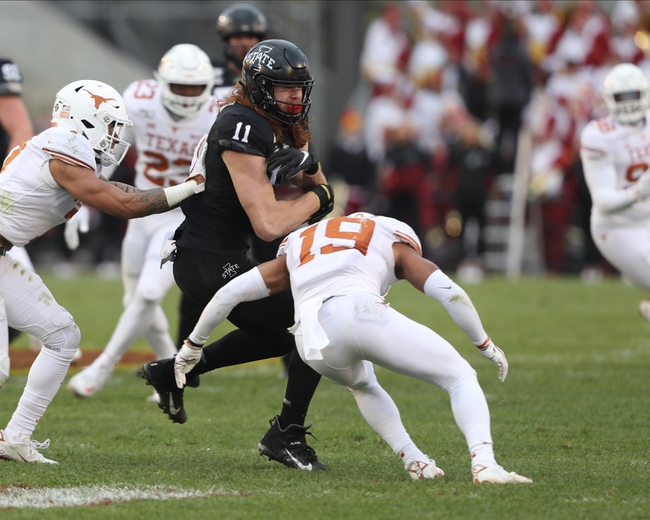 The Iowa State Cyclones are on the road for a Big 12 tilt against the Texas Longhorns.  Iowa State finished the 2019 season with an overall record of (7-6), while Texas went (8-5).  The two teams met last season, as Iowa State secured a home win, 23-21.  Let’s take a closer look at both programs.  Get College Football predictions at Pick Dawgz.

Iowa State will be led this season by quarterback Brock Purdy.  Purdy had an impressive game in the matchup against Texas last season, throwing for over 350 yards and 2 scores. The Cyclones return a surplus of talent this season and should be able to once again match up with Texas.  Iowa State should have one of the better offenses in the Big 12 during 2020, which will help keep Iowa State in most of the games.  A nice complement to Purdy will be running back Breece Hall.  Hall rushed for almost 900 yards last season. For more on Iowa State, check out the team preview.

Texas will be hoping for a redemption  in this contest, as Texas came out on the losing end last season.  Just like Iowa State, Texas will be guided by a returning quarterback.  Sam Ehlinger will be under center and will need to perform well if Texas wants to stick with Iowa State in this one.   Ehlinger passed for almost 275 yards and 3 scores in the matchup last season.  Texas will need to find some younger players to step in, as the Longhorns lost a few key skill players from last year's 8 win team.  For more on Texas, check out the team preview.

Overview:  The oddsmakers have pegged Texas as 10.5 favorites in the early stages.  This game last season between the two teams was just a 2 point difference.  Both teams this season should be competing for a top spot in the Big 12.  However, Iowa State returns more skilled players on offense than Texas, which should benefit the Cyclones in keeping this contest close.  I’m going to take Iowa State to cover this spread on the road, as this should be a very good game that could come down to the last possession.