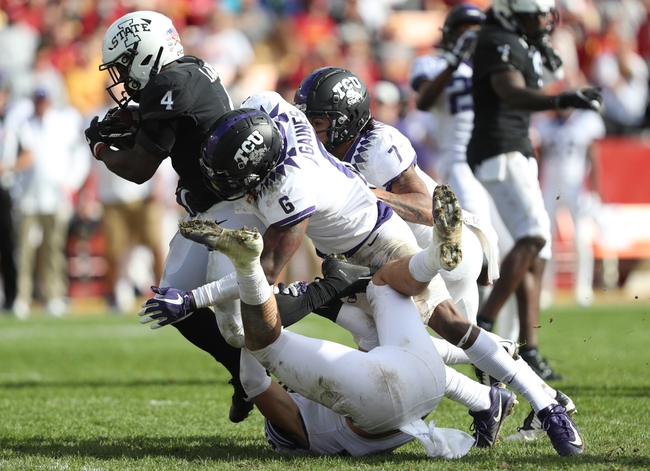 The Iowa State Cyclones are on the road for a Big 12 tilt with the TCU Horned Frogs.  Iowa State finished the 2019 season with an overall record of (7-6), while TCU went (5-7).  The two teams met last season, as Iowa State routed TCU, 49-24.  LEt’s take a closer look at both programs.  Get College Football predictions at Pick Dawgz.

The Iowa State offense looks to be paced by Brock Purdy during 2020.  Purdy will be entering his junior season.  The quarterback threw for almost 4,000 yards last season.  The quarterback showed the ability to be a dual threat, as Purdy also collected 8 touchdowns on the ground.  The quarterback was tremendous in the game a year ago against TCU, throwing for 247 yards, while rushing for over 100 yards.  He was responsible for 4 touchdowns in the game.  The coaching staff will be looking for sophomore running back Breece Hall to build off of a stellar freshman season.  Hall rushed for almost 900 yards and recorded 9 scores during his freshman campaign.  For more on Iowa State, check out the team preview.

TCU did not live up to the standards that the fans were hoping for last year.  TCU missed the postseason, finishing with a losing record on the season.  However, even though the team finished with a losing record, the program still saw more than a couple players hear their name called during the 2020 NFL Draft.  Texas Christian University will have a returning quarterback.  Quarterback Max Duggan is back for a 2020 campaign, after passing for more than 2,000 yards, while tossing 15 touchdowns and 10 picks as a freshman.  The Horned Frogs did lose two running backs from the 2019 team.  The Defense struggled last season and this year could be more of the same.  For more on TCU, check out the team preview.

Overview: TCU has opened as a small 1 point favorite against Iowa State.  The oddsmakers have decided to give the home team the edge in this early prediction.  However, I believe Iowa State should have a potent team during the 2020 campaign.  The Cyclones offense will have plenty of talent and should be able to score with the best of them.  TCU lost more than a few players to the NFL draft from last season's 5 win team.  I’m going to put stock in the road team, as I like for Iowa State to finish near the top of the Big 12.