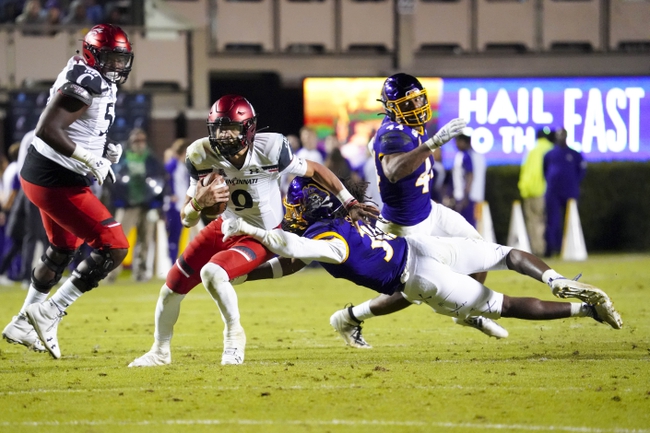 The Line: Cincinnati -17.5 -- Over/Under: Click Here for the Latest Odds

The East Carolina Panthers are on the road for a clash with the Cincinnati Bearcats in a AAC matchup.  East Carolina finished the 2019 season with an overall record of (4-8), while Cincinnati went (11-3).  The two met last season and it was a shootout.  Cincinnati came out on top a year ago, sneaking past East Carolina 46-43.  Let’s take a closer look at each program.  Get College Football predictions at Pick Dawgz.

East Carolina will be guided during the 2020 campaign by quarterback Holton Ahlers.  Ahlers passed for nearly 3,400 yards, while tossing 21 touchdowns.  East Carolina will be looking to improve off of a 2019 season that saw the team average almost 27 points per game.  The backfield will be manned by DeMetrius Mauney.  Mauney rushed for almost 450 yards as a freshman during the 2019 season.  Wideout C.J. Johnson will be looked at for some of the leadership on offense during 2020.  The defense has to be better, if the program wants to compete with Cincinnati this season.  For more on East Carolina, check out the team preview.

Desmond Ridder will be the guy in charge of making the offense tick during the 2020 season for Cincinnati.  In the meeting last season, Ridder passed for 161 yards, while throwing 1 touchdown and 2 picks.  The dual threat quarterback will be hoping to have another balanced season, with this year having the possibility to be his best.  The Bearcats offense will look a tad different, as star running back Michael Warren II moved onto the NFL.  Warren rushed for more than 1,200 yards a season ago.  The defense was a big part of the success for Cincinnati during 2020.  For more on Cincinnati, check out the team preview.

Overview: Cincinnati has opened up as heavy favorites for this contest, as oddsmakers have pegged the Bearcats as 17.5 point favorites.  The East Carolina defense was not good last season by any means and their best defensive player from a year ago is not returning. Cincinnati struggled to pull away from East Carolina last season, but with the Pirates leader in the pass rush department gone, Cincinnati should have an easier time this season, especially with the game being at home.  I’m going to side with Cincinnati to cover this spread at home, as the Bearcats will be more experienced and talented compared to the Pirates.