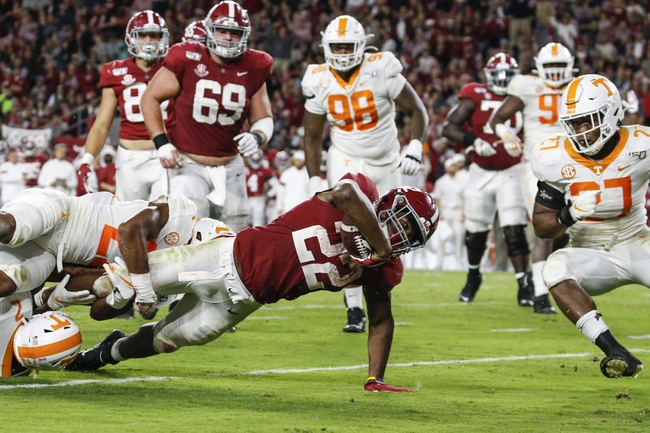 The Alabama Crimson Tide will be on the road for a SEC matchup with the Tennessee Volunteers.  Alabama finished the 2019 season with an overall record of (11-2), while Tennessee went (8-5).  Alabama won the meeting in 2019 against Tennessee, 35-13.  Let’s take a closer look at each program.  Get College Football predictions at Pick Dawgz.

Alabama will be paced this season by quarterback Mac Jones.  While being the back up last season, Jones still managed to pass for over 1,500 yards a year ago, while throwing 14 touchdowns.  Najee Harris is back for the Crimson Tide, as he will be looking to up his draft stock during 2020.  Jones will be searching for DeVonta Smith in this contest, as Smith returns for a senior year, after hauling in 68 receptions for over 1,200 yards.  Alabama lost some defensive players since the conclusion of last year's season, but Nick Saban always has a good defense.  For more on Alabama, check out the team preview.

Tennessee will be guided in this game by quarterback Jarrett Guarantano.  Guarantano will be entering his senior season and should be able to improve off of his 2019 campaign, where he passed for almost 2,200 yards.  The Volunteers didn’t have the premier running back last season, as the coaching staff used three running backs consistently.  All three running backs collected 101-135 rushing attempts.  However, the receiving core could be a concern, as Tennessee saw their top 2 wideouts graduate.  The two players that graduated combined for 14 receiving touchdowns.  For more on Tennessee, check out the team preview.

Overview: The oddsmakers have Alabama as 15 point favorites on the road for this SEC matchup.  Alabama has and will be an elite team in the SEC and that does not look like that will change anytime soon.  Alabama should be able to hold a Tennessee offense in check that will be missing their top wideouts from last season.  One area of concern, the Tennessee defense.  Tennessee lost plenty of talent from a defense that helped Tennessee secure 8 wins last season.  Look for the Alabama offense to be too much for Tennessee to handle at home.  Tennessee will keep this game close for a half, but I’m putting stock in Alabama to cover this road spread.