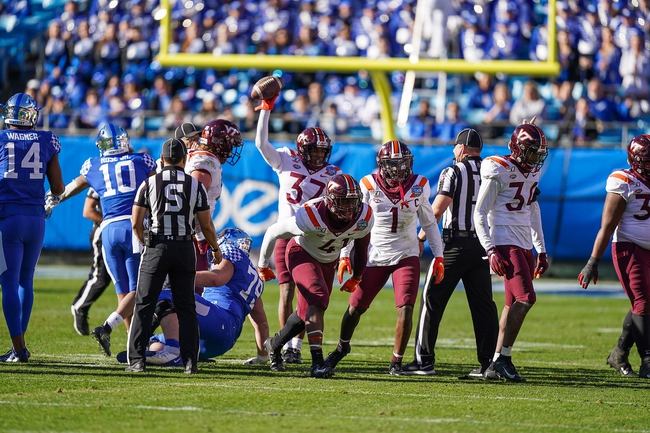 The Penn State Nittany Lions are on the road for a non-conference matchup with the Virginia Tech Hokies.  Penn State is entering the 2020 season, after finishing the 2019 campaign with an overall record of (11-2), while Virginia Tech went (8-5).  Let’s take a closer look at each program.  Get College Football predictions at Pick Dawgz.

The Penn State Nittany Lions will be guided on offense by Sean Clifford once again, as he is back under center for the 2020 season.  Clifford threw for over 2,600 yards, while connecting 23 times with his receivers for touchdowns.  The program will also welcome back running back Journey Brown.  Brown rushed for almost 900 yards, while contributing 12 touchdowns.  However, Penn State will have to overcome the loss of their top wideout from last season.  KJ Hamler reeled in 56 receptions for 904 yards, while adding 5 touchdowns.  The defense will be interesting to watch, as quite a few players played there last season during 2019.  For more on Penn State, check out the team preview.

Virginia Tech saw a mixture of players take snaps under center, but Hendon Hooker saw the majority of the playing time.  Hooker returns for the junior season, after throwing for more than 1,500 yards and adding 13 passing touchdowns.  Running back Deshawn McClease returns for his 5th season, as he enters his senior year.  He rushed for over 840 yards, while contributing 7 scores.  The defense was solid last season, as the program ranked in the top 50 in fewest points allowed per contest.  For more on Virginia Tech, check out the team preview.

Overview: Penn State has opened up as 7 point favorites in this non-conference matchup.  Virginia Tech should be better than last season, as the schedule works in the Hokies favorite.  Penn State on the other hand should be a top contender in the Big Ten by season end.  The way the schedule matches up for Penn State, the program should be able to coast through the season, with seeing minimal damage to their win loss record.  While Virginia Tech will be good, Penn State is on another level.  I’ll take Penn State to cover this spread on the road.