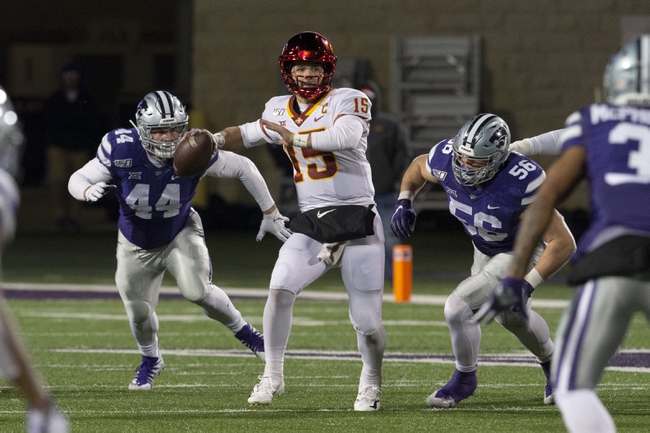 The Kansas State Wildcats hit the road for a Big 12 Conference tilt with the Iowa State Cyclones.  Kansas State finished the 2019 season with an overall record of (8-5), while Iowa State went (7-6).  Kansas State knocked off Iowa State in a season finale last year, 27-17.  Let’s take a closer look at both programs.  Get College Football predictions at Pick Dawgz.

Kansas State was led last season by quarterback Skylar Thompson.  Thompson passed for over 2,300 yards, while throwing 12 touchdowns.  Thompson returns for his senior year.  However, the Wildcats will need to overcome the loss of running back James Gilbert.  Harry Trotter looks to have the best chance to take over the starting running back role.  The defense will need to be just as good as last year, if Kansas State wants to hang around with some of these Big 12 teams during 2020. The defense allowed less than 22 points per contest last year.  For more on Kansas State, check out the team preview.

Iowa State in my opinion realistically could compete for one of the top spots in the Big 12 this season.  The Iowa State program returns plenty of talent from a year ago.  The offense will be once again guided by quarterback Brock Purdy.  Purdy passed for just under 4,000 yards on the season, while tossing 27 touchdowns.  The offense will also have running back Breece Hall.  Hall did his part a season ago, rushing for almost 900 yards, while finding the end zone 9 times.  Purdy also has the luxury of one of his favorite wideouts from the 2019 campaign back for the 2020 season. The defense should also be able to improve during 2020, as there is more than enough experience on the defensive side of the ball.  For more on Iowa State, check out the team preview.

Overview: Iowa State has opened up as 9 point favorites in this home conference game.  Iowa State.  Iowa State went 5-2 at home last season, which looks to be improved during 2020.  The moral of this game will come down to the Cyclones and their offense.  Iowa State Should be able to put up bunches of points on just about anyone during this upcoming season.  Kansas State will have a decent record when this game kicks off, partially due to the fact that their non-conference slate is a cup cake. With a talented offense, Iowa State will have the ability to compete for a top spot here in the Big 12 during 2020.  I’ll take Iowa State to win by two scores and to cover the spread at home against Kansas State.