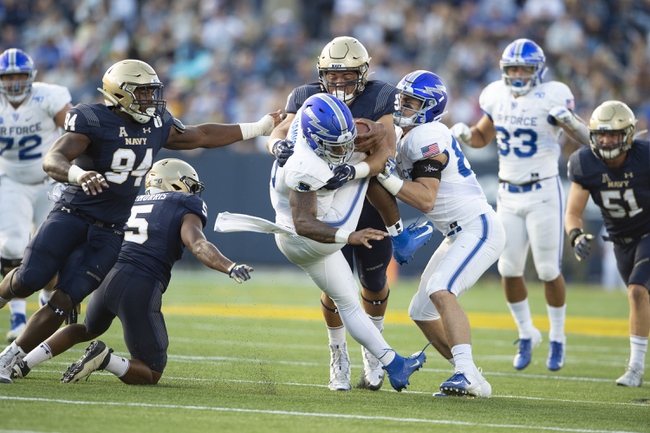 The Navy Midshipmen will be on the road for a clash with the Air Force Falcons.  Navy finished the 2019 season with an overall record of (11-2), while Air Force went (11-2).  The two programs faced off during the 2019 season, as Navy came out on top with a 34-25 win.  Let’s take a closer look at both of these programs.  Get College Football predictions at Pick Dawgz.

Navy will still look to run the triple threat offense during 2020, but the offense is for sure to look different.  Navy saw quarterback Malcolm Perry play his senior year during 2019.  Coach Ken Niumataolo is still at the helm, therefore it should be no problem for him to find a quarterback that is able to come in right away and make a difference in this styled offense scheme.  The program does welcome back running back Jamale Carothers.  Carothers rushed for over 730 yards last season.  The offense will be looking to Perry Olsen to step in at quarterback and find success. This is a program that was near the top in points per contest on offense, so it will be hard for Navy to mirror that type of play, with a new quarterback under center.  For more on Navy, check out the team preview.

Air Force will be led once again by quarterback Donald Hammond III.  Hammond passed for just 1,316 yards, but did rush for more than 550 yards.  The quarterback totaled 26 touchdowns.  Coach Troy Calhoun will be looking at Kadin Remsberg to have another good season out of the backfield.  Remsberg rushed for over 1,000 yards, while finding the end zone 8 times.  While this offense is primarily a run first styled offense, the team will need to pass the ball on occasion.  With that being said, Air Force lost their top 2 wideouts from their 2019 team.  For more on Air Force, check out the team preview.

Overview: This is a matchup of two programs that currently have a run first scheme.  Air Force will be looking for revenge this season, as the Falcons fell to Navy during 2019.  Navy will have a new quarterback under center, while Air Force will have a quarterback that has experience in what some call a rivalry game.  Both defenses were more than solid a year ago.  This could be a game where the team with the least amount of mental mistakes comes away with the win, as this game has the possibility of being a low scoring game.  With the spread being so small and Air Force having an experienced quarterback, I’m going to stay chalk and take the home team in Air Force.