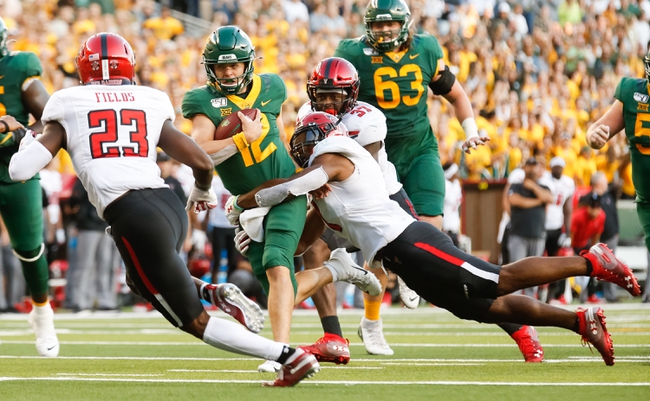 The Line: Baylor -2.5 -- Over/Under: Click Here for the Latest Odds

The Baylor Bears head to in-state foe and Big 12 member, the Texas Tech Red Raiders.  Baylor will be looking to sustain their same success that was shown during 2019.  Texas Tech will be trying to improve off of their 2019 season.  Baylor finished the 2019 campaign with a record of (11-3), while Texas Tech went (4-8).  Let’s take a closer look at each of these programs.  Get College Football predictions at Pick Dawgz.

Baylor will be once again led by quarterback Charlie Brewer for this upcoming college football season.  Brewer passed for over 3,100 yards, while contributing 21 passing touchdowns.  The program will also have running back John Lovett back for the 2020 season.  Lovett will be looked at to once again show leadership for this Baylor program.  However, Baylor did lose their top wideout Denzel Sims to the NFL draft.  Sims was a huge part of the success that Baylor had during the 2019 campaign.  Baylor will also be under the direction of a new head coach.  For more on Baylor, check out the team preview.

Texas Tech while having a down year last season, the program did lose quite a few players to the NFL draft.  Texas Tech does return their starting quarterback.  Jeff Duffey is back for his senior year.  Duffey looks to improve off of a solid 2019 year.  The offense should be able to show some excitement again this season, but the big question will be on the defensive side.  The defense allowed over 30 points per contest a year ago.  The defense lost Jordyn Brooks, he was their best player from last season.  For more on Texas Tech, check out the team preview.

Overview: Texas Tech should be a couple wins better than last year, but winning a game even at home against Baylor could be a stretch.  Baylor will be different than last season, but Charlie Brewer is still there and will be able to make plays when consistently for the Bears offense.  The Texas Tech defense was not stellar last season and this year is even a question mark, as some of the better defensive players from the defense a year ago are now in the NFL.  The Red Raiders will be better in 2020, but a cover against Baylor seems unlikely.  I’ll side with the Baylor Bears to cover this spread on the road.