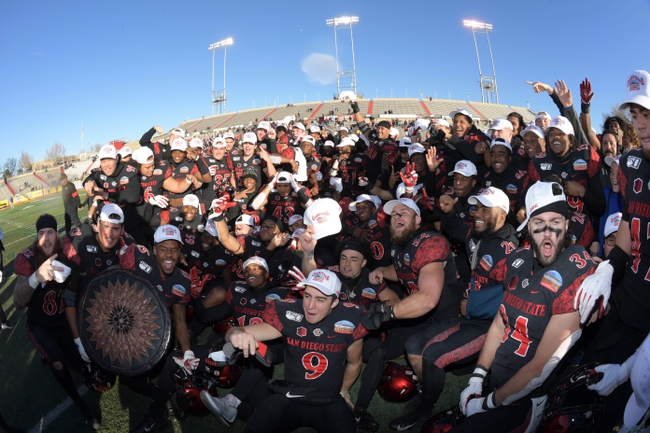 San Diego State will have a different feel during the 2020 campaign, especially during Mountain West play.  The Aztecs were led last season by quarterback Ryan Agnew.  Agnew passed for nearly 2,500 yards, while throwing for 14 touchdowns.  However, he was a senior and the coaching staff will be looking to Carson Baker to pick up the slack at quarterback.  San Diego State fans aren’t exactly sure what the backfield will look like, or who will be the biggest threat out of the backfield, as the program had 4 running backs see considerable amounts of playing time last season.  The defense was stout a year ago and will need to be tough on the road, if San Diego State wants to secure a road win.  For more on San Diego State, check out the team preview.

Utah State ended the season with a loss to Kent State in a bowl game, a game where the defense gave up 51 points.  Utah State struggled last season on defense, giving up over 30 points per contest.  The defense will have to improve if the Aggies want to win more games than what some may expect, due to the program losing quarterback Jordan Love.  Love was drafted in the first round of the 2020 draft.  Utah State will also need to replace their running back Gerold Bright.  The offensive production might be in question, as it will depend on how Henry Colombi and Jaylen Warren fill in.  Colombi looks to have the best chance under center, while Warren should be the guy in the backfield.  For more on Utah State, check out the team preview.

Overview: San Diego State has opened up as 4.5 point favorites on the road.  Both teams will have a new quarterback this season, as both lost their staple under center from a year ago.  One area that should set San Diego State apart from Utah State, would be the defense.  San Diego State still returns talent from the offensive side of the ball, which should speak for itself in this game against Utah State, as the Aggies shouldn’t improve drastically from a year ago on defense.  Utah State finished just 1 game over .500 a year ago, even with a quarterback that was a first round draft pick.  I see Utah State regressing from last season, I’ll take San Diego State to take care of business on the road and cover this 4.5 spread.