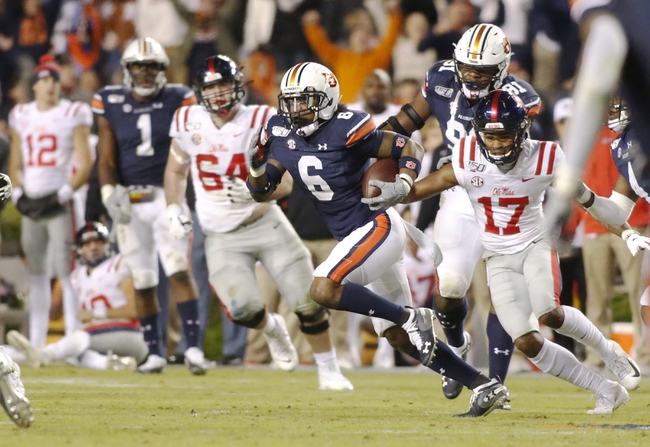 The Line: Auburn -9.5 -- Over/Under: Click Here for the Latest Odds

The Auburn Tigers hit the road for an SEC tilt with the Ole Miss Rebels on September 19, 2020.  Auburn finished the 2019 campaign with an overall record of (9-4), while going (5-3) in SEC play.  Ole Miss didn’t have the success Auburn had, finishing the 2019 season with a record of (4-8), while going (2-6) in SEC play. Auburn won the previous meeting, which took place during the 2019 season, 20-14.  Let’s take a closer look at both programs. Get College Football Predictions at Pick Dawgz.

Auburn will be looking to start the season 3-0, after playing host to Alcorn State and North Carolina to open the season.  Auburn returns their core skill players, led by quarterback Bo Nix.  Nix passed for over 2,500 yards, while throwing 16 touchdowns and rushing for another 7.  The backfield also has the likes of JaTarvious Whitlow.  Whitlow rushed for over 750 yards and found the end zone 10 times on the ground.  Moral of the Auburn Tigers is, the program returns a surplus of firepower on both sides of the ball.  For more on Auburn, check out the team preview.

Ole Miss had a combination of two quarterbacks during the 2019 campaign.  Ole Miss used Matt Corral for passing situations, while John Rhy Plumlee was more of a rushing quarterback.  Corral passed for over 1,300 yards, while Plumlee rushed for more than 1,000 yards.  Ole Miss had a lot of youth last season, which should lead to more success during 2020.  However, a game against Auburn early in the season could be a tough task.  For more on Ole Miss, check out the team preview.

Overview:  The Auburn Tigers have opened as 9.5 point favorites for this road contest.  Ole Miss should see better success than a year ago, but Auburn should also be better than last season's team.  Auburn returns plenty of talent for the 2020 season and really should be competing for a top spot in the SEC.  The Tigers have the chance to be one of the most elite teams during the 2020 season.  Auburn returns plenty of starters from a year ago, both on offense and defense.  While Ole Miss should be good enough to sneak into a bowl game, I’m siding with Auburn to win by at least 10 points in the SEC matchup.