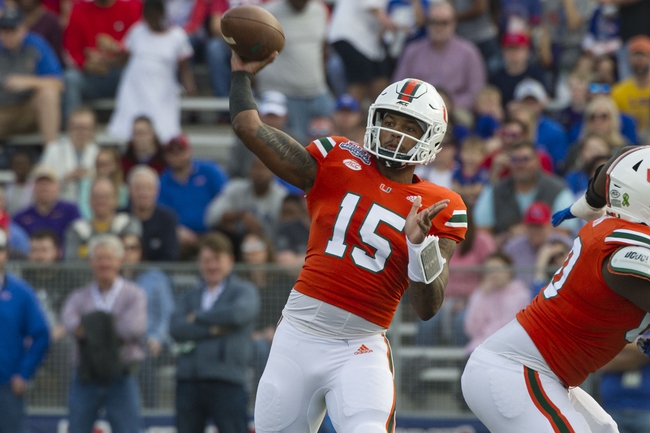 The Miami Hurricanes are on the road for a non-conference showdown with the Michigan State Spartans.  Miami finished the 2019 season with a record of (6-7), while Michigan State was (7-6).  Let’s take a look at both teams for this matchup. Get College Football picks all season long at Pick Dawgz.

Miami will look to be guided by sophomore quarterback Jarren Williams.  Williams passed for almost 2,200 yards, while throwing 19 touchdowns and 7 interceptions.  Miami also has Cam’Ron Harris in the backfield for 2020.  Harris will be looking to improve his stat line from last season, after rushing for 576 yards.  The receiving core will be a little light on experience. As Miami lost two wideouts from last season.  Tight end Brevin Jordan does return, after totaling 495 yards nad 2 scores as a sophomore. The defense was a bright spot in a losing season, as the defense held opponents to about 20 points.  Miami had a great pass rush, registering 47 sacks.  The defense will be looking for another great season out of Gregory Rousseau.  For more on Miami, check out the team preview.

Michigan State will be in transition mode at the quarterback position, as Brian Lewerke signed with the New England Patriots.  The backfield will look to sophomore Elijah Collins to help lead this team against Miami and throughout the season.  Collins is coming off an impressive freshman season, where he collected 988 yards rushing and 5 scores.  The wideout core is a little weak, as a couple players moved on to the NFL.  The Spartans defense was just as solid as Miami, allowing just over 22 points per contest.  The defense totaled 40 sacks during th3 2019 campaign.  For more on Michigan State, check out the team preview.

Overview:  The spread has opened as Miami being a field goal favorite.  Not knowing what the fan situation will be, plays a role in this contest.  Michigan State is down this season, but Miami will also need some help, especially in the receiving core.  I like for Miami to up their win total from last season, while Michigan State will regress.  However, this game at Michigan State is a  step up from Miami’s previous three games to start the year.  I look for this to be a low scoring game, as Michigan State’s defense will keep them in this one.  I’m going to side with the home team, as Michigan State gets a quality non-conference win during the new era of Mel Tucker.