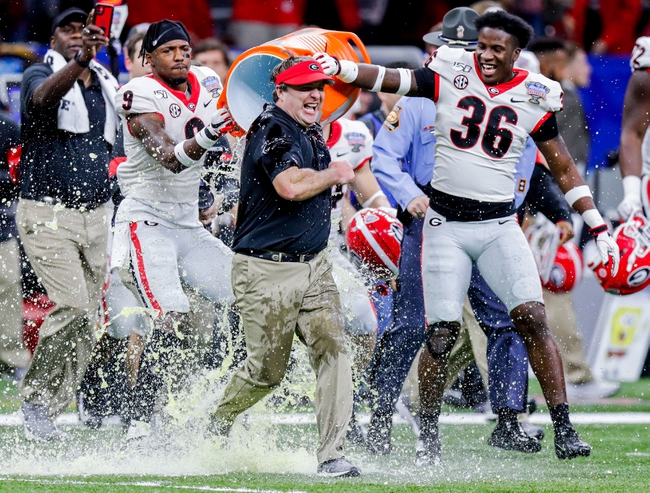 The Line: Georgia -17.5 -- Over/Under Click Here for the Latest Odds

The Virginia Cavaliers will be at a neutral site for a game against the Georgia Bulldogs in the season opener on September 7th, 2020.  Georgia finished the 2019 season with an overall record of (12-2), while Virginia finished (9-5).  Georgia ended their season with a 26-14 win over Baylor in the AllState Sugar Bowl. Virginia ended their 2019 season with a 36-28 loss to SEC member Florida in the Capital One Orange Bowl.  Let’s take a look at both these teams for this matchup. Get College Football picks all season long at Pick Dawgz.

Georgia will be looking to start the season off with a win, but will be led by someone other than Jake Fromm.  Georgia landed former Wake Forest quarterback Jamie Newman.  Newman transferred to Georgia as a graduate.  The former Wake Forest quarterback passed for 2,800 yards, while having a great touchdown to interception ratio of 24 to 5 a year ago.  Look for him to not skip a beat, as he attempts to lead Georgia to another successful campaign.  Running back Zamir White looks to try and fill D’Andre Swift’s shoes.  White rushed for over 400 yards and 3 scores.  The defense was stellar a season ago, allowing the fewest points per contest.  For more on Georgia, check out the team preview.

Virginia will be in transition mode, as their dual threat quarterback from a season ago Bryce Perkins graduated.  The offense will need players to step up, as it won’t be easy to fill the role of Perkins.  The offense does have running back Wayne Taulapapa back for the 2020 season.  Taulapapa rushed for nearly 500 yards, but did have 12 touchdowns.  The program also lost their star wideout from 2019, so the offense will be turning to Terrell Jana to take over the rola as the number 1 wideout.  The defense last season showed great strengths at times, as the defense totaled 46 sacks.  Defensively, Virginia returns some key players.  For more on Virginia, check out the team preview.

Overview: While Virginia had a solid season last year, Georgia is one of the premier college football programs right now.  A big difference for both programs is the quarterback situation.  Georgia lost their starting quarterback from a season ago, but will be replaced by another starter.  Whereas Virginia will be in the midst of getting their new quarterback situated.  This game may be at a neutral site, but this game is not far from the Georgia campus.   Look for Jamie Newman to lead Georgia to a victory on the road.  Georgia covers this spread, as the Bulldogs will be to much for Virginia in a season opener.