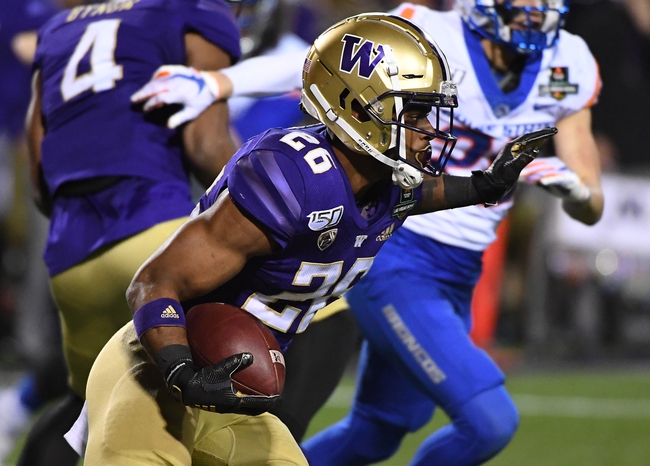 The Line: Michigan -3.0 -- Over/Under: Click Here for the Latest Odds

The Michigan Wolverines open up their 2020 season on the road at Pac-12 member, the Washington Huskies.  Michigan is coming off a 2019 season that saw the team finish with an overall record of (9-4), while Washington finished with an (8-5) record. This will be the first game of the season for both schools.  Let’s take a look and see what players each team will be relying on for his matchup.  Get College Football picks all season long at Pick Dawgz.

The quarterback role at Michigan is kind of up in the air at this point, as there are two players that could land the starting job.  Dylan McCaffrey and Joe Milton are both inthe running to land the starting job.  Neith quarterback saw a lot of playing time last season, as both sat behind starter Shea Patterson.  The good news for the offense is, running back Zach Charbonnet saw considerable time as a freshman last season.  Charbonnet will hope to build off of a 2019 season that saw hime total 726 yards rushing and 11 touchdowns.  For more on Michigan, check out their team preview.

Washington will be looking to keep on building success, even with quarterback Jacob Eason moving on.  Washington The program will also have a new coach, as Chris Peterson resigned.  Jacob Sirman looks to be the leading candidate to take over for Eason for the 2020 campaign.  The backfield is also a little light, after having 1,000 yard rusher Salvon Ahmed move on to the NFL. Richard Newton looks to step in and take over the role.  Newton rushed for nearly 500 yards and totaled 10 touchdowns last season.  Washington also lost their top 2 wideouts from a season ago. For more on Washington, check out their team preview.

Overview: This is a spread that has opened as Michigan being a field goal advantage better.  While I think Washington has the ability to be near the top of the Pac-12 again, this is a tough game to open the season.  Washington will be running out a new starting quarterback, but Michigan will be doing the same.  If this game was at Michigan, I would have no trouble picking Michigan.  However, this is a road contest and will be the first game for whoever coach Jim Harbaugh chooses to be his starter.  This should be a good game, but I’m going to side with Washington, as they are the home team.  The defense for Washington can keep the Huskies in this one, as Washington did force 22 turnovers last season, while allowing less than 20 points per game.  I look for there to be more jitters for the Michigan quarterback, as the Wolverines are on the road in this contest.  Therefore, I’m taking Washington to outright win this contest and cover the spread, 20-17.