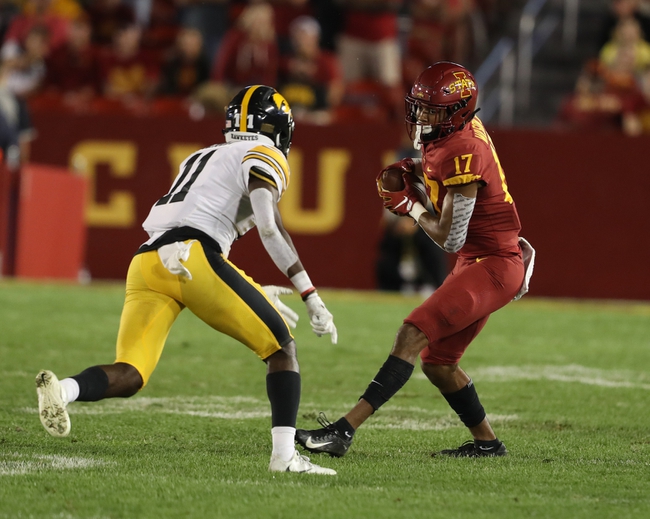 The Iowa State Cyclones hit the road for an in-state matchup with the Iowa Hawkeyes.  Iowa State is coming off a 2019 season that saw a 19-17 home loss to Iowa.  Iowa State finished the 2019 campaign with an overall record of (7-6), while Iowa went (10-3).  Let’s take a look at who each team will be looking at to contribute in this contest that will take place on September,12, 2020.  Get College Football picks all season long at Pick Dawgz.

Iowa State will be led during the 2020 season by junior quarterback Brock Purdy.  Purdy passed for nearly 4,000 yards, while throwing 27 touchdowns and 9 interceptions.  The program will also be counting on running back Breece Hall to balance the efforts in this contest.  Hall rushed for almost 900 yards last season and 9 scores.  Iowa State will also return one of their top wideouts from last season.  The defense was better than average last season, allowing under 26 points per contest.  Iowa State returns one of their best defensive players from last season, Lawrence White.  White totaled 84 tackles, while also being disruptive when the ball was in the air.  For more on Iowa State, check out the team preview.

Iowa does not have the same fortune of bringing back their starting quarterback from the 2019 season.  Iowa lost quarterback Nate Stanley due to graduation.  Stanley nearly threw for 3,000 yards, while tossing 16 touchdowns.  Coach Kirk Ferentz has the option of going with Spencer Petras under center for 2020.  While the Hawkeyes will be young at the quarterback position, Tyler Goodson will look to bring some experience out of the backfield.  Goodson rushed for almost 650 yards and found the end zone 5 times.  Iowa will also lean on their top 2 wideouts from last season, as both return.  Those two wideouts are Ihmir Smith-Marsette and Tyrone Tracy Jr. Defensively, the defense will need to replace their stellar pass rusher in AJ Epenesa.  Linebacker Joe Evans looks to have increased playing time this season and will be looking to disrupt Brock Purdy. For more on Iowa, check out the team preview.

Overview: Iowa State is on the road for this contest, but don’t automatically count out the Cyclones.  Iowa went to Iowa State last season and came away with a 2 point victory.  Iowa State brings back more on their offense, compared to Iowa. Iowa State definitely has the upper hand at the quarterback position, as Brock Purdy should be able to have an even better year during 2020.  Iowa State ranked 50th last season in points allowed, but should improve on that this season.  Iowa State has a combination of 10 juniors and seniors that will see the majority of playing time on defense. The defense is upperclassmen heavy, which is a plus for the cyclones here.  While I do think Iowa will find themselves in a bowl game again, it will take a few games for whoever Coach Ferentz chooses to start at quarterback to get comfortable. I like for Iowa State to get off to a great start and get a road win.  Iowa State is a team that can be sneaky good inside the Big 12 and a road win at Iowa will jump start this team and give the Cyclones the confidence they need.  I’m taking Iowa State to outright win this road contest, 23-20.