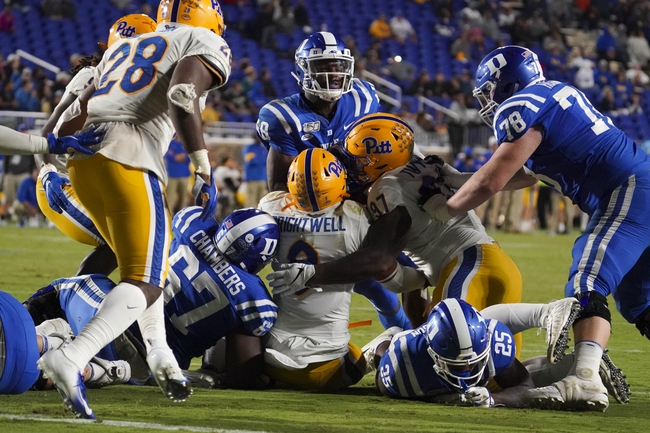 The Line: Pittsburgh -9.5 -- Over/Under: Click Here for the Latest Odds

The Pittsburgh Panthers will play host to the Duke Blue Devils on September, 26, 2020 in a ACC tilt.  Pittsburgh snuck away with a 33-30 road victory at Duke last season.  Pittsburgh finished the 2019 campaign with a record of (8-5), while Duke went (5-7).  Let’s take a look at who these teams will be counting on during this matchup and 2020. Get College Football picks all season long at Pick Dawgz.

First the road team, Duke will be hoping for leadership out of running back Deon Jackson.  Jackson rushed for 641 yards, while adding 6 touchdowns on the ground.  Duke will have to overcome the loss of quarterback Quentin Harris.  It looks as if backup quarterback Chris Katrenick should be in line for the starting role this season.  The program will also welcome back their leader receiver from last season.  Jalon Calhoun totaled over 400 yards receiving, while adding 4 scores.  While the offense might be inexperienced at the quarterback position, the defense returns their playmakers from a year ago.  Both their top pass rushers return from last season, as Victor Dimukeje and Chris Rumph combined for 15 sacks.  For more on Duke, check out the team preview.

Pittsburgh ended the 2019 season on a high note, with a bowl win over Eastern Michigan.  Pittsburgh returns most of the key players from that team, especially on offense.  Starting quarterback Kenny Pickett is entering his senior year.  Pickett passed for over 3,000 yards, while throwing 13 touchdowns.  Running back A.J. Davis is also entering his senior season.  Davis will be looking to end his Panthers career on a high note, after rushing for 530 yards a season ago.  The defense is where the Panthers won some games last season.  The defense had one of the best pass rush departments in all of college football a year ago.  The team registered 51 sacks and their top 2 pass rushers return for the 2020 season.  This is a team that has a surplus of upperclassmen, with 18 players being either a junior or senior on both sides of the ball, that are atop the depth chart.  For more on Pittsburgh, check out the team preview.

Overview: The Blue Devils should be improved from last season, as the schedule works in their favor for 2020.  However, Pittsburgh should be even better than Duke.  The Panthers return a ton of upperclassmen, that were all a part of the 8 win team from a season ago.  With Pittsburgh having one of the best pass rush departments in all of college football, look for Pittsburgh to rush Chris Katrenick or whoever else it may be in making decisions.  Pittsburgh’s defense will win them a few games this season and this game will be one of them, as this will be Duke's first real test against a power 5 opponent.  I’m taking Pittsburgh to cover this spread at home, 35-17.