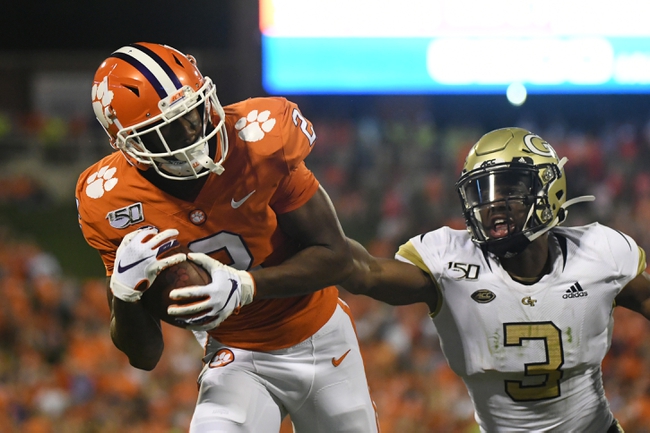 The Clemson Tigers open the season on the road against the Georgia Tech Yellow Jackets.  Clemson finished the 2019 season with an overall record of (14-1), while Georgia Tech finished (3-9).  Clemson opened the season last year with a win over Georgia Tech, 52-14. Clemson will be looking for the same result during the 2020 season opener.  Let’s take a look at who both teams will be counting on this season. Get College Football picks all season long at Pick Dawgz.

Clemson has the luxury of starting quarterback Trevor Lawrence returning this season.  Lawrence will be looking to build off of a 2019 campaign that saw him pass for 3,665 yards, while throwing 36 touchdowns and 8 interceptions.  As if having Lawrence returning wasn’t enough, the program will also welcome running back Travis Etienne and his decision to return for his senior season.  Etienne rushed for over 1,600 yards, while totaling 19 rushing touchdowns.  Due to the departure of Tee Higgins, look for Justyn Ross to be Lawrence’s favorite target. The defense allowed the 3rd fewest points last season and will be looking to limit the Georgia Tech damage. For more on Clemson, check out their team preview.

Just like Clemson, Georgia Tech welcomes back their quarterback from last season.  The Yellow Jackets James Graham will be entering his sophomore season.  He passed for 1,164 yards, while collecting 12 passing touchdowns and 7 interceptions.  The team has had a run first mentality here in recent seasons and last year was no different.  Georgia Tech rushed 448 times a year ago.  Defensively, the defense has to improve if Georgia Tech wants to be competitive in this season opener.  The defense had just 17 sacks a year ago.  For more on Clemson, check out their team preview.

Overview:  Clemson will win plenty of games, just based on their offensive firepower.  The offense will be fast paced and not many defenses will be able to keep up with the Tigers.  Georgia Tech will do its best to keep the ball on the ground and eat up the clock.  However, there will come a point in the game, where Georgia Tech will need to start passing.  Look for Clemson to win the battle at the line on both sides of the ball and force turnovers through the air, when forcing Graham to pass.  This is a heft spread on the road, but Clemson has had no trouble winning by this big of margin in previous road games against ACC opponents. I look for Clemson to get out to an early lead and never look back, winning and covering the spread, 42-13.