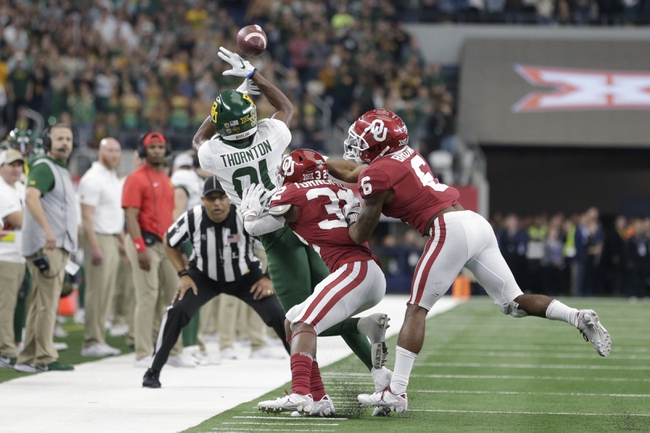 The Baylor Bears are on the road for a tough Big 12 matchup against the Oklahoma Sooners.  Baylor finished the 2019 season with an overall record of (11-3), while Oklahoma finished the season (12-2).  Baylor lost to Oklahoma during the regular season, 34-31, while also taking a loss to Oklahoma during the Big 12 Championship. It was clear that Oklahoma had Baylor’s number last year.  Let’s take a look at the two teams and see who the programs will be counting on in this matchup. Get College Football Picks all season long at pick Dawgz.

Baylor returns Charlie Brewer, their starting quarterback from last season.  Brewer will be entering his senior season and will be looking to up his draft stock. The quarterback passed for nearly 3,200 yards, while throwing 21 touchdowns to just 7 interceptions.  Running back John Lovett is also back for a senior season.  Lovett rushed for over 655 yards and 5 scores.  The program will need a player to step up in the reccing game, as wideout Denzel Mims was drafted in the 2nd round.  The defense was a huge part of Baylor’s success last season and the defense will be trying to mirror that success this season.  The defense had one of the best pass rush departments throughout all of the FBS.  The defense did have a few key players move on to the NFL.  The program is now led by Dave Aranda, who takes over for Matt Rhule.  For more on Baylor, check out their team preview.

Oklahoma will be looking to sustain their success from last season and will be hoping that there program is again the team to beat.  However, Oklahoma lost key pieces to both sides of the ball.  Oklahoma lost their starting quarterback Jalen Hurts and his favorite target CeeDee Lamb.  The backfield will still be carried by Kennedy Brooks.  Brooks rushed for over 1,000 yards and 6 scores.  He looks to be leaned on more for this offense during the 2020 season.  Defensively, this team only turned the opposition over 11 times a year ago.  With the quarterback situation up  in the air to this point, the defense will need to be just as good as last year, if not better.  For more on Oklahoma, check out their team preview.

Overview: Baylor returns their starting quarterback from a season ago, while Oklahoma will have a different player under center.  It’s clear that Oklahoma had Baylor’s number last year.  Although, Baylor kept both games within reach, losing by 3 points and then falling in OT by 7 points.   While this game is on the road for Baylor, I still expect Baylor to keep this game within reach.  This is a Bears defense that will have 6 juniors and 2 seniors at the top of the depth chart.  While I am unsure on how good Oklahoma will be with a different starting quarterback and losing other key starters, regardless Baylor should be able to keep this game within two touchdowns.  I think Baylor has a great chance to win this one, but I'll play it safe and take the points, Baylor falls 27-21.