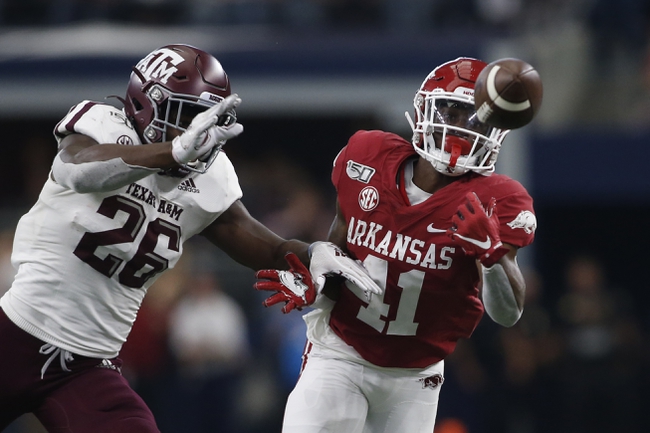 The Arkansas Razorbacks play host to the Texas A&M Aggies in a SEC showdown.  Arkansas will return home, after 2 previous road games.  Texas A&M finished the 2019 season with a record of (8-5), while Arkansas went (2-10).  Texas A&M won the meeting a year ago, 31-27.  Let’s take a look at what these two teams have to offer for this matchup.  Get College Football picks all season long at Pick Dawgz.

Texas A&M will be looking to keep the momentum riding, after being at home the previous three home games.  Kellen Mond will be the guy that this offense runs through, as he returns for his senior season.  Last season Mond passed for 251 yards, while completing 23 of 35 passes, while throwing for 3 touchdowns in the win over Arkansas.  Running back Isaiah Spiller is back for a sophomore season.  He will be trying to eclipse the 1,000 yard mark on the ground, as he came up 54 yards short in 2019.  The defense will be led again by linebacker Buddy Johnson.  For more on Texas A&M, check out the team preview.

Arkansas will be looking to find consistency under center, as the program saw 5 different quarterbacks see playing time a year ago.  Nick Starkel passed for  over 1,100 yards and 7 touchdowns, but did throw 10 picks.  Don’t be surprised if Jack Lindsay gets a shot at the starting role for 2020.  While the quarterback position might be a question mark, the backfield will be led by Rakeem Boyd.  Boyd rushed for over 1,100 yards, while scoring 8 touchdowns.  He will be a key piece if Arkansas is to be more competitive this season.  A bigger concern for Arkansas is the defense.  The defense will have to be better than last year, to compete with Texas A&M and others.  The defense allowed nearly 39 points per contest.  The defense did lose their top 2 pass rushers from a season ago.  For more on Arkansas, check out the team preview.

Overview: Texas A&M will be looking to close out their 4 game home stand with a win.  This game is technically at a neutral site, but the game still will take place in Texas.  Kellen Mond should be one of the better quarterbacks in the SEC this year, as he is entering his senior year.  The quarterback situation is all but solved at this point for Arkansas and seeing that the Razorbacks have 3 relatively decent games before this one, the quarterback coil chance by week 4, if one struggles.  Arkansas gave up almost 39 points per game a year ago and lost two of their better players. The Arkansas program is under new leadership, but it will take some time for new head coach Sam Pittman to turn the tide here.  I’m siding with Texas A&M, as the Aggies should win and cover the spread in this one.