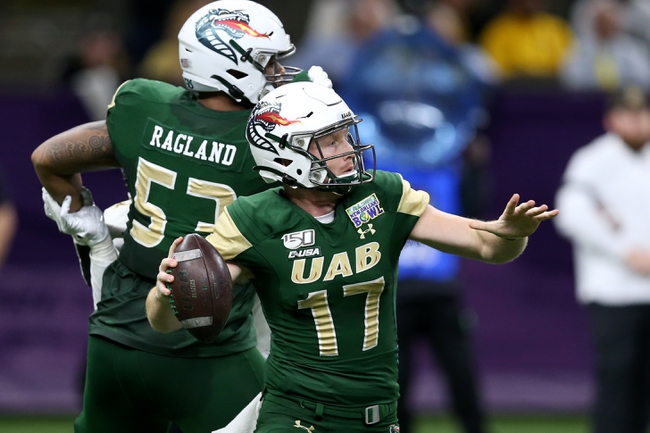 The UAB Blazers will be looking to build off their first place finish in the C-USA West.  UAB finished the 2019 season with an overall record of (9-5), while going (6-2) in C-USA play.  The offense averaged 23.1 points per contest, which ranked 102nd at the FBS level.  The defense kept UAB in games, allowing just 21.6 points per game.  The program is under the direction of Bill Clark.

The offense was led by quarterback Tyler Johnston III.  Johnston passed for 2,250 yards, while throwing 17 touchdowns and 15 interceptions.  He returns for his junior season.  Running back Spencer Brown had a team leading 566 yards rushing, while finding the end zone 5 times.  Brown will be entering his senior year during 2020.  Wideout Austin Watkins looks to build off of an impressive 2019 season.  Watkins reeled in 57 receptions for 1,092 yards, and 6 scores.  The wideout will be playing his senior year during this upcoming campaign.

As a team the defense collected 44 sacks, 7 interceptions, and recovered 13 of 18 forced fumbles.  The defense was guided by linebacker Kristopher Moll.  Moll had a team high 103 tackles, while also contributing 9 sacks.  The linebacker returns for this upcoming season.  Linebacker Jordan Smith out did Moll in the pass rush department, as he totaled 10 sacks, which was the team lead.  Smith is also back for the 2020 season.  The secondary will be paced by safety Will Boler.  Boler registered 9 pass break ups and 2 interceptions.  Boler will be a junior this season.

Let us take a look at the UAB schedule for the 2020 season.

The Blazers open the season with four straight non-conference matchups.  UAB plays host to New Mexico State and Alabama A&M, before hitting the road for back to back games against Miami and South Alabama.

The projected win total is set at 8 wins.  Miami isn’t coming off one of their stronger seasons, but should still be able to out last UAB.  UAB should go 3-1 during non-conference play.  UAB opens conference play with two easier games.  UAB should be able to expose the weaknesses of UTSA and Rice, which leads to a 5-1 start for the Blazers.  Throughout the remaining part of the schedule, UAB has the luxury of playing both Old Dominion and UTEP.  Both programs combined to go 2-22 last season.  Both those are road games, so that means a few teams better will visit UAB.  The UAB program has 7 wins on their schedule, outside of North Texas and Southern Miss.  Both of those games are at home and there is no reason UAB can’t win both.  The Blazers return their playmakers on offense, which should only raise the point total average per contest. I look for UAB to win at least 1 of the two games, if not both(North Texas & Southern Miss).  Therefore, I’m taking UAB to cash the over on the win total of 8 wins.