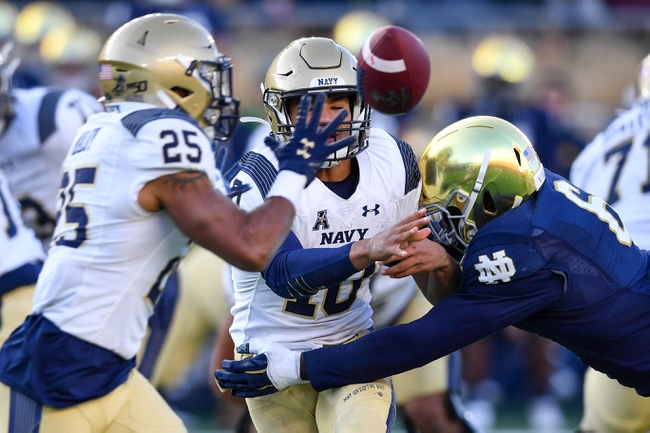 The Navy Midshipmen open the season against the Notre Dame Fighting Irish.  This game will be held at a neutral site, as the two schools will match up in Dublin.  Now it is possible that the location of this game gets moved, due to the virus outbreak.  Navy finished the 2019 season with an overall record of (11-2), while Notre Dame also went (11-2).  The win total for Navy was projected at 7.5, while oddsmakers have set the win total for Notre Dame at 9 wins.  Get free college football picks all season long at Pick Dawgz.

Navy had one of the better offenses all season long last year, ranking 12th in points per game.  A big part of that offense was quarterback Malcolm Perry.  However, Perry will not return.  With this being the first game of the season, one could imagine that there will more than likely be some first game jitters for whoever is under center.  Perry Olsen has a chance to be the game one starter.  The program will see one of their huge parts of their rushing success last season return. Running back Jamale Carothers returns for Navy in 2020.  He will help sustain the success that was shown during this triple threat offense.  The defense was stout for Navy a year ago and a few key players return. For more on who the Navy will be counting on during the 2020 season, take a look at their team preview.

Notre Dame will look to open the season with a win, but this team will be different than last season's squad.  The program will still have quarterback Ian Book to look to for leadership.  Book is coming off an impressive season, where he threw for over 3,000 yards and 34 touchdowns.  Outside of Book, Notre Dame lost a few playmakers that were instrumental to last season's success.  The defense was a staple in the success last year, as the defense ranked 12th.  If Notre Dame wants to have a chance in this contest, the defense will need to mirror their success from a season ago.  For more on who Notre Dame will be relying on during the 2020 season, take a look at their team preview.

Overview: Both teams are coming off 11 win seasons, while one is returning the same quarterback and the other will be in the midst of transitioning quarterbacks.  Navy while losing their starting quarterback from a season ago, does return plenty of firepower on offense and defense.  Coach Niumataolo has found success in running the triple threat offense, so look for Navy to eat up the clock and limit the amount of time Notre Dame quarterback Ian Book has the ball. Notre Dame has questions on offense this year and with this being the first game of the year, I'm hesitant on putting stock in Notre Dame, especially with Navy returning plenty of talent on defense. I’m taking Navy to cover this double digit spread.