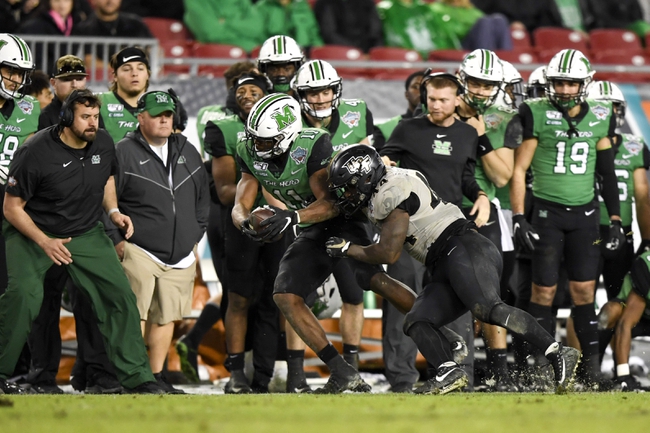 The Marshall Thundering Herd will be looking to build off of a 2019 season that saw the program finish in 2nd place in the East division of C-USA.  Marshall finished the 2019 campaign with an overall record of (8-5), while going (6-2) in C-USA play.  The offense averaged 25.8 points per contest, which ranked 89th at the FBS level, while the defense allowed an average of 25 per game.  The program is under the direction of Doc Holliday.

The offense was led by sophomore quarterback Isaiah Green.  Green passed for 2,438 yards, while throwing for 15 touchdowns and 11 picks.  The incoming junior quarterback also added 5 rushing touchdowns last season. The backfield was paced by workhorse Brenden Knox.  Knox rushed for 1,387 yards, while finding the end zone 11 times.  Armani Levias recorded a team high 46 receptions for 553 yards, while 3 of those receptions were for touchdowns. Levias was a senior during the 2019 season.  Wideout Willie Johnson looks to elevate his play and targets, as he enters his senior season.  Johnson had just 13 receptions but averaged nearly 27 yards per catch, while adding 4 touchdowns.

As a team the defense totaled 35 sacks, 10 interceptions, and recovered 6 of 8 forced fumbles.  The defense was guided by linebacker Tavante Beckett.  Beckett had a team high 121 tackles, while also collecting 2 sacks.  The linebacker is back for his senior season.  The defensive line was held together by Darius Hodge.  Hodge registered 7 sacks, which was the most on the team.  He is back for the 2020 season.  Steven Gilmore is back for Marshall in the secondary, as he enters his junior year.  Gilmore registered 4 pass break ups, 2 interceptions, and 50 tackles.

Let us take a look at the Marshall schedule for the 2020 season.

The Thundering Herd will open the season against East Carolina on the road.  Marshall will then play host to Pittsburgh, before traveling to Ohio.  The last out of conference game is a matchup with Boise State.

The projected win total is set at 7 wins.  Marshall will be in a tough spot for non-conference play, as the program will have to be perfect to grab more than 1 win in non-conference play in 2020.  Marshall will have an easier time towards the end of their schedule, but the over isn’t out of the question.  The program returns plenty of firepower on the offensive side of the ball, while key players are also back on defense.  Marshall could see a below .500 record in the middle of the season, but have a real chance of ending the season with 4 straight wins.  I’m going to side with the over, Marshall will have at least 6 wins, but then have a chance to win 2 games against Ohio and Louisiana Tech.  At worst, Marshall should push, but I’m going to take Marshall to cash this over a total of 7 wins.