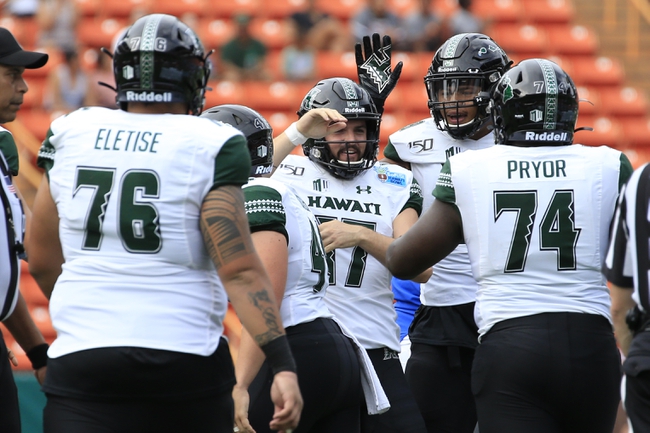 The Hawaii Rainbow Warriors were up and down during the 2019 season but they still did enough to win ten games. There are a lot of changes coming from 2020, but the hope is they can still find some success. Check back all season long with Pickdawgz for free college football picks on every single game.

So will Hawaii hit six or more wins this season? Let’s break it down.

Cole McDonald was the star of the show in 2019 under center for the Rainbow Warriors, but he is gone now after declaring for the draft and being selected in the seventh round by the Tennessee Titans.

A new quarterback isn’t the only big change for Hawaii. Nick Rolovich took the Washington State job so he and his staff are gone. In his former Arizona State Sun Devils coach Todd Graham is now in charge of the Rainbow Warriors.

Even though the Rainbow Warriors lost McDonald they do have Chevan Cordeiro back along with eight other starters on the offense. Cordeiro did get plenty of playing time last season and that should help him.

Pick: The Hawaii Rainbow Warriors didn’t do themselves any favor with their non-conference schedule. Playing Arizona, UCLA, and Oregon in a four week span is quite the tough schedule for any team, And not getting the type of talent that others get, is going to make it even tougher.