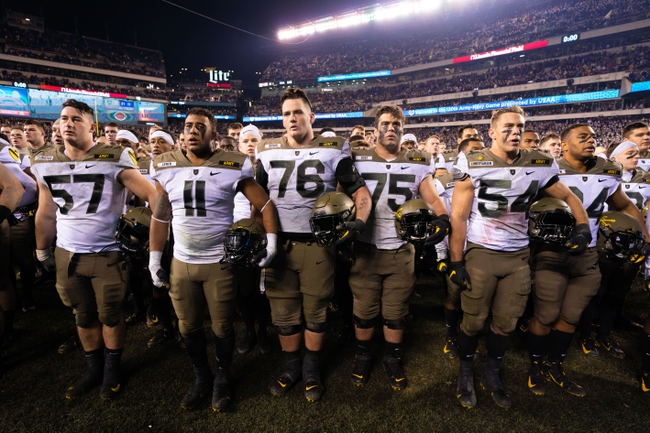 The Army Black Knights will be looking to improve their record during the 2020 campaign.  Army finished the 2019 season with an overall record of (5-8).  With Army being an independent program, there is no conference record for the school.  The offense averaged 28.5 points per contest, which ranked 68th at the FBS level.  The defense allowed an average of 23.  The defense ranked 41st in fewest points allowed per game.  The program is under the direction of Jeff Monken.

The program runs the triple threat offense and was led by quarterback Kelvin Hopkins Jr.  Hopkins passed for just 577 yards, whie throwing 4 touchdowns and 6 interceptions.  However, he did rush for 710 yards and 7 scores.  The offense totaled 45 rushing touchdowns during the 2019 season.  There were 6 players that had at least 3 rushing scores.  Sandon McCoy led Army in rushing touchdowns with 10, while adding 576 yards on the ground. He looks to take over as the number 1 running back, as Connor Slomka signed as a n undrafted free agent with the Jacksonville Jaguars. Wideout Camden Harrison is back, after reeling in 25 receptions for 433 yards and 3 scores.

As a team the defense recorded 21 sacks, 7 interceptions, and recovered 10 fumbles.  The defense was led by linebacker Cole Christiansen.  Christiansen had a team leading 112 tackles, while adding 2.5 sacks.  He is now part of the Los Angeles Chargers.  The pass rush was led by defensive back Elijah Riley.  Riley had a team high of 4 sacks, while also having 6 pass break ups and 3 interceptions.  The defensive back signed as an undrafted free agent with the Philadelphia Eagles.

Let us take a look at the Army schedule for the 2020 season.

The Black Knights open the season against Bucknell, before hitting the road for a contest against Rice.  Army has a good blend of games on their schedule for the 2020 season.  The projected win total sits at 6 wins.

Army had its chances last season, to pull an upset against Michigan, who at the time was ranked 7th, but fell in double OT.  Army has more than a couple very winnable games this season.  The program should see wins over Bucknell, Princeton, Eastern Michigan, UMass, and UConn.  After those 5 games, Army has two toss up games against Buffalo and Miami, OH.  I don’t see the program winning both games, but I won’t rule out a win against one of them, if Army can play perfect.  If Army falls behind early by multiple scores, it could be tough to win a few of these games, with mainly having a rushing offense.  I’m going to side with the under, as I see a push at best happening.  With two of those games being a toss up, I’m taking the under to be safe.